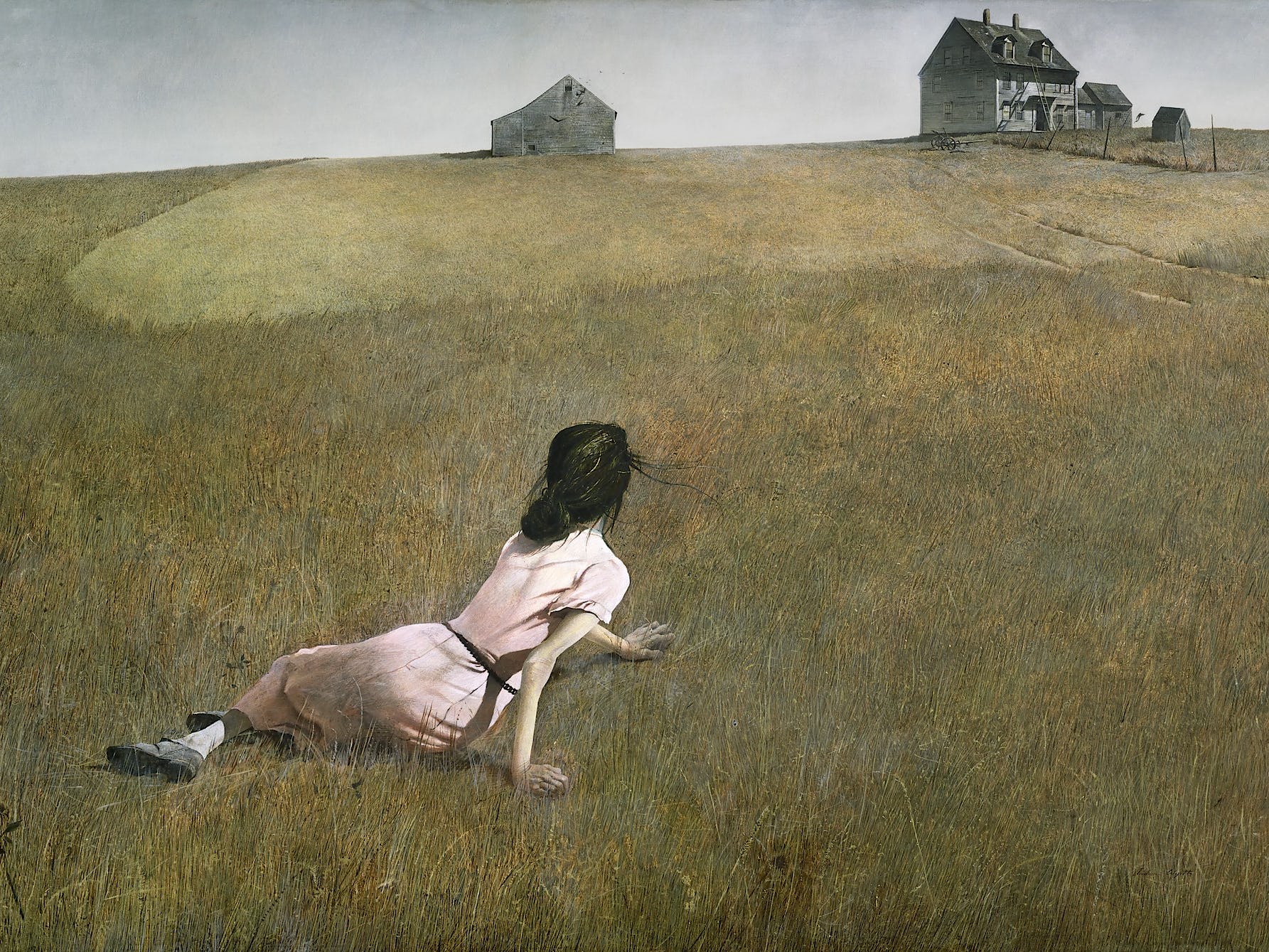 Christina’s World is one of the most iconic – and most mysterious – American realist paintings of the twentieth century. At first glance, there is nothing unsettling about the scene. But the meaning of Andrew Wyeth’s (1917–2009) painting changes dramatically when we learn about his subject, Christina Olson, whose contorted body has captivated and haunted critics for decades.

Wyeth was the youngest of the five children to the illustrator and artist N. C. Wyeth. As a teenager, he accompanied his father to work and, with his guidance, he mastered figurative studies, watercolour, and later egg tempera.

He met Christina Olson in 1939. She lived on a farm in Cushing, Maine which her ancestors had settled in 1743. The sixteen-room house, which is pictured in Wyeth’s painting, was her family home.

After her parents passed in 1935, Christina lived at the house alone with her brother Alvaro. As time went on, she suffered from weakness in her feet and lower leg muscles which made it harder to walk.

Neurologists initially thought she had polio but it is now believed she suffered from a then undiagnosed, neurodegenerative condition called Charcot-Marie Tooth disease. By the time she reached her late twenties, Christina was paralysed from the waist down. Stubborn and self-reliant, she resisted the idea of using a wheelchair or crutches, instead preferring to crawl or drag herself around the house.

Destitute and isolated, Christina and her brother made a meagre living selling chicken eggs and surplus vegetables. By the 1940s, unlike the rest of America which saw an explosion of consumer goods and a steep rise in the middle class, the two siblings muddled along, almost entirely detached from the rest of the wider community.

That was until they were introduced to Wyeth by his wife Betsy. Over time, the group became closer and more trusting of each other. By 1945, Wyeth could often be found roaming the land surrounding the farm, painting en plein air, or working in one of the bedrooms of the house Christina allowed him to use as a studio.

Wyeth pictured on a car painting en plein air next William Waterway Marks, who was a guest at his sheep farm in the summer of 1977

Wyeth decided to paint Christina’s World after looking out the window of his studio one late afternoon in the summer of 1948. He saw Christina dragging herself across the grassy plain below.

Watching her frail, deformed body attempt to propel herself back to the house, he couldn’t help but marvel at her resilience. Reflecting on why he chose to paint Christina, Wyeth once stated that he sought ‘to do justice to her extraordinary conquest of a life which most people would consider hopeless.’

However, without this context, the painting’s composition continues to shroud it in mystery today. Seeing Christina from behind – without a glimpse of her face – the viewer focuses on her twisted and straining body. Her hands grip the earth beneath her as she crawls alone on a desolate landscape. It is tempting to try to fill in the gaps: projecting a new narrative onto the painting. Is she fearful? Longing? Defiant? Vulnerable? What was Wyeth trying to achieve by depicting her in this way?

Annie Leist, a visually-impaired New York artist and associate educator in Community for MoMa, suggests that the painting should be considered both joyous and limited. Christina was 55 when Wyeth decided to paint her, but it is well known that he opted to use his 26-year-old wife Betsy as his model.

Leist prompts viewers to reflect upon why Wyeth chose to use a non-disabled body to depict disability. What should we make of this reimagined version of Christina’s figure with youthful hips?

American art historian and critical theorist Kaja Silverman suggests such representations can, in some cases, be helpful because they allow the viewer ‘to identify with bodies we would otherwise repudiate.’ In this sense, fictive though she is, Christina’s body is both vulnerable and courageous.

It is clear that Wyeth wanted the painting to be viewed as uplifting. ‘It’s very interesting that Christina’s World has such wide appeal’, Wyeth explains. ‘People seem to put themselves into it. I get literally hundreds of letters a year from people saying that it’s a portrait of themselves’.

Everyone arrives at the painting with different experiences and interpretations. There is no right or wrong reading. Reflecting on his now-iconic painting, Wyeth elucidates that ‘If in some small way I have been able in paint to make the viewer sense that [Christina's] world may be limited physically but by no means spiritually, then I have achieved what I set out to do.’

Christina herself is said to have loved the painting: ‘Andy put me where he knew I wanted to be. Now that I can’t be there anymore, all I do is think of that picture and I’m there.’ 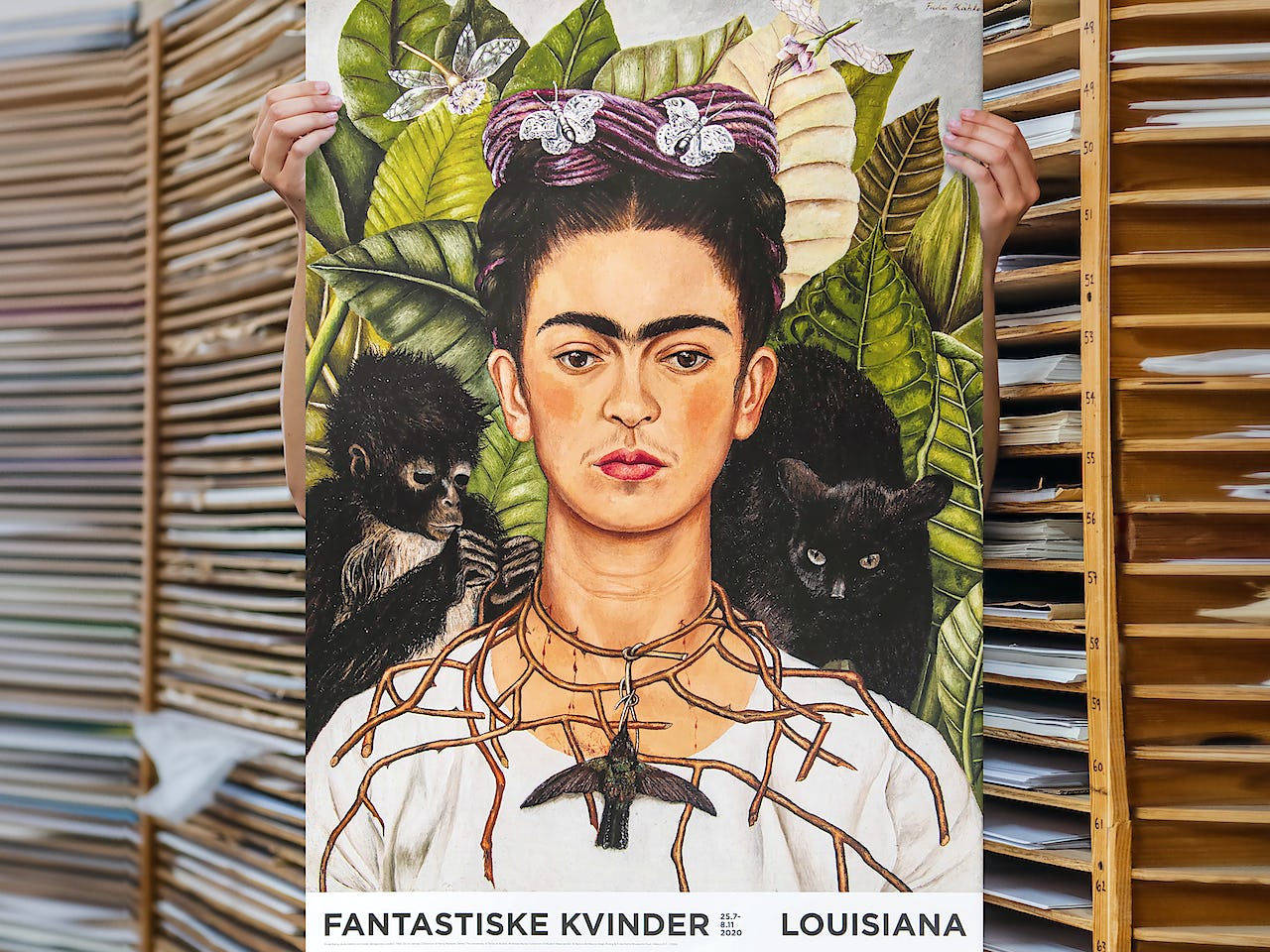 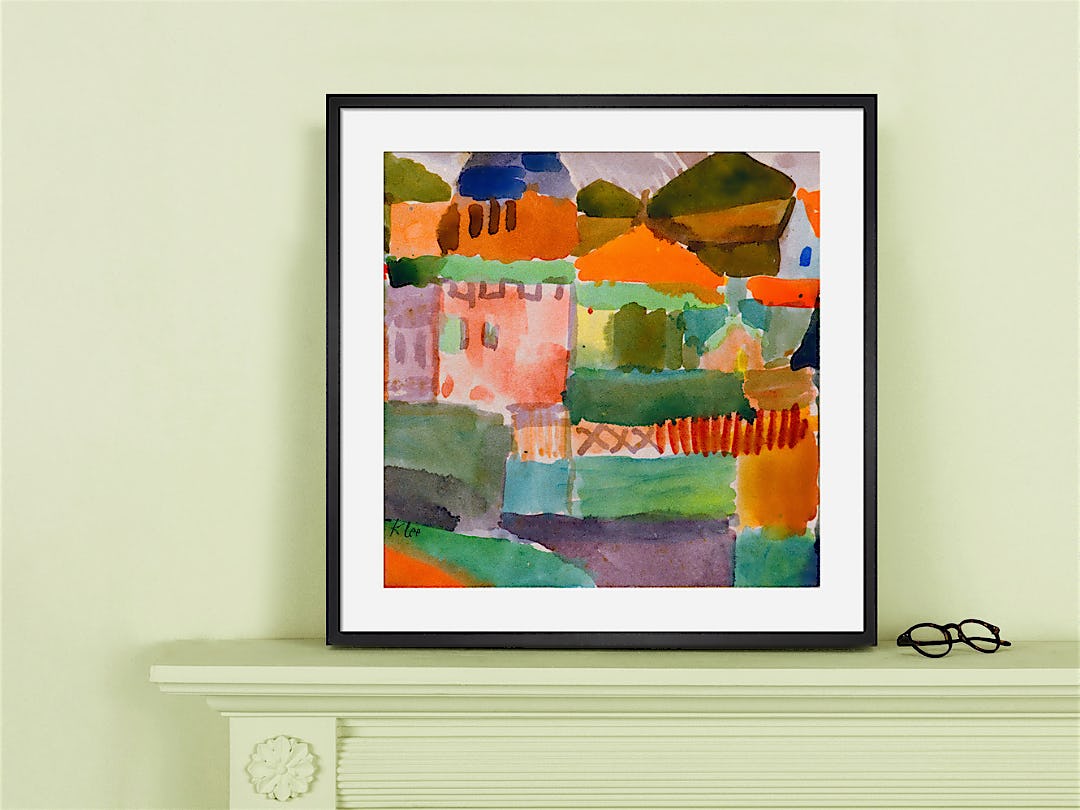 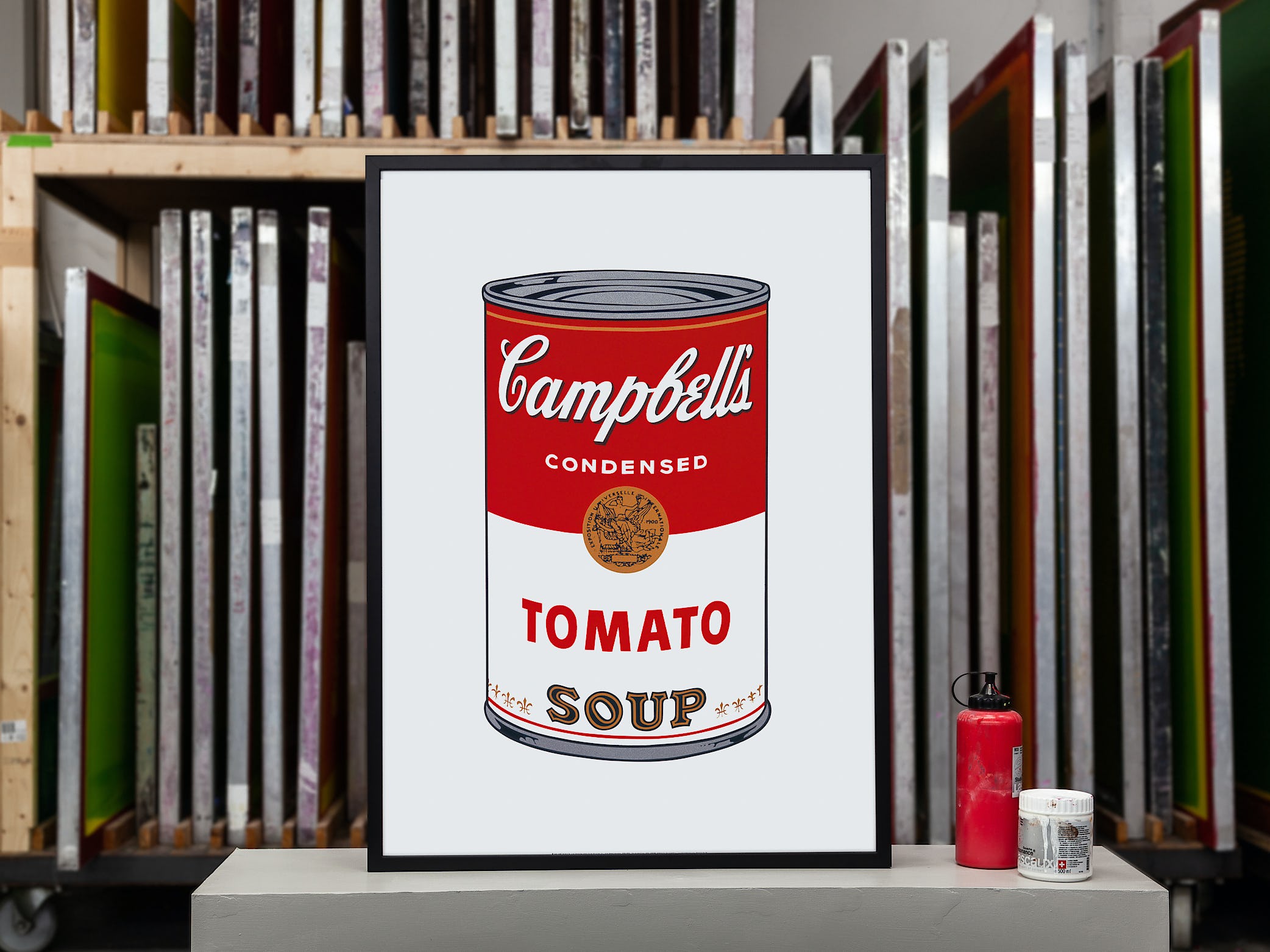 The artworks that made Andy Warhol