Artwork of the week: Equivalents for the Megaliths, Paul Nash, 1935 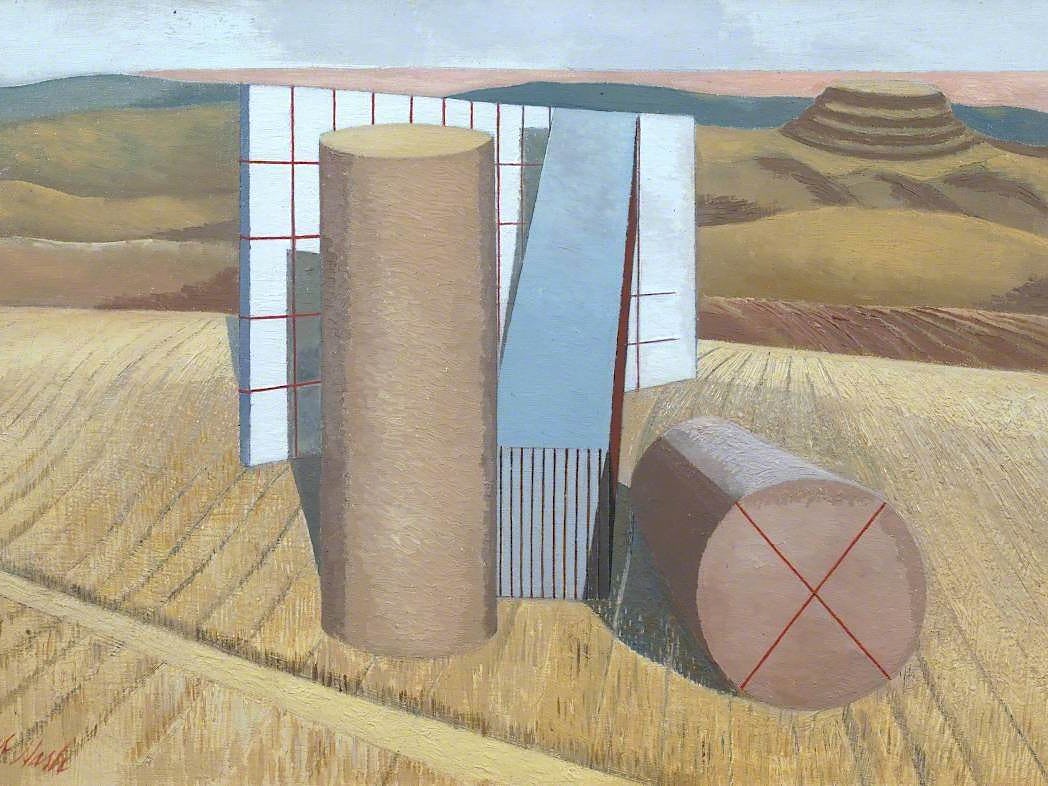 Paul Nash was 25 and just establishing himself as an artist when World War I broke out. A sensitive man, fascinated by nature and the wider world around him, he was shocked by the devastating effects of war. As an official war artist, he documented the broken debris of battlefields – scarred landscapes decimated with shell-holes, mounds of earth, and skeletal tree trunks. Yet, although he is best known for exposing the bitter truth of war through such paintings, his later Surrealist works should not be overlooked. Inspired by the ‘spirit’ of landscapes trees (Nash believed the natural world around him was alive and sentient), the cycle of life, death and rebirth became regular themes in his work. Join us as we explore the influences that led him to create one of his most enigmatic artworks: Equivalents for the Megaliths, 1935.

In the 1920s and 30s, Nash emerged as one of the great figures in British Modernism. He was the only major British artist of his generation who was also a regular critic of, and essayist on, art. Increasingly interested in the cutting-edge art that was coming out of the continent, he began to experiment with abstraction and surrealism. Heavily influenced by the 1928 Giorgio de Chirico exhibition he had seen in London, Nash concentrated on revealing the mysterious aspects of landscapes. 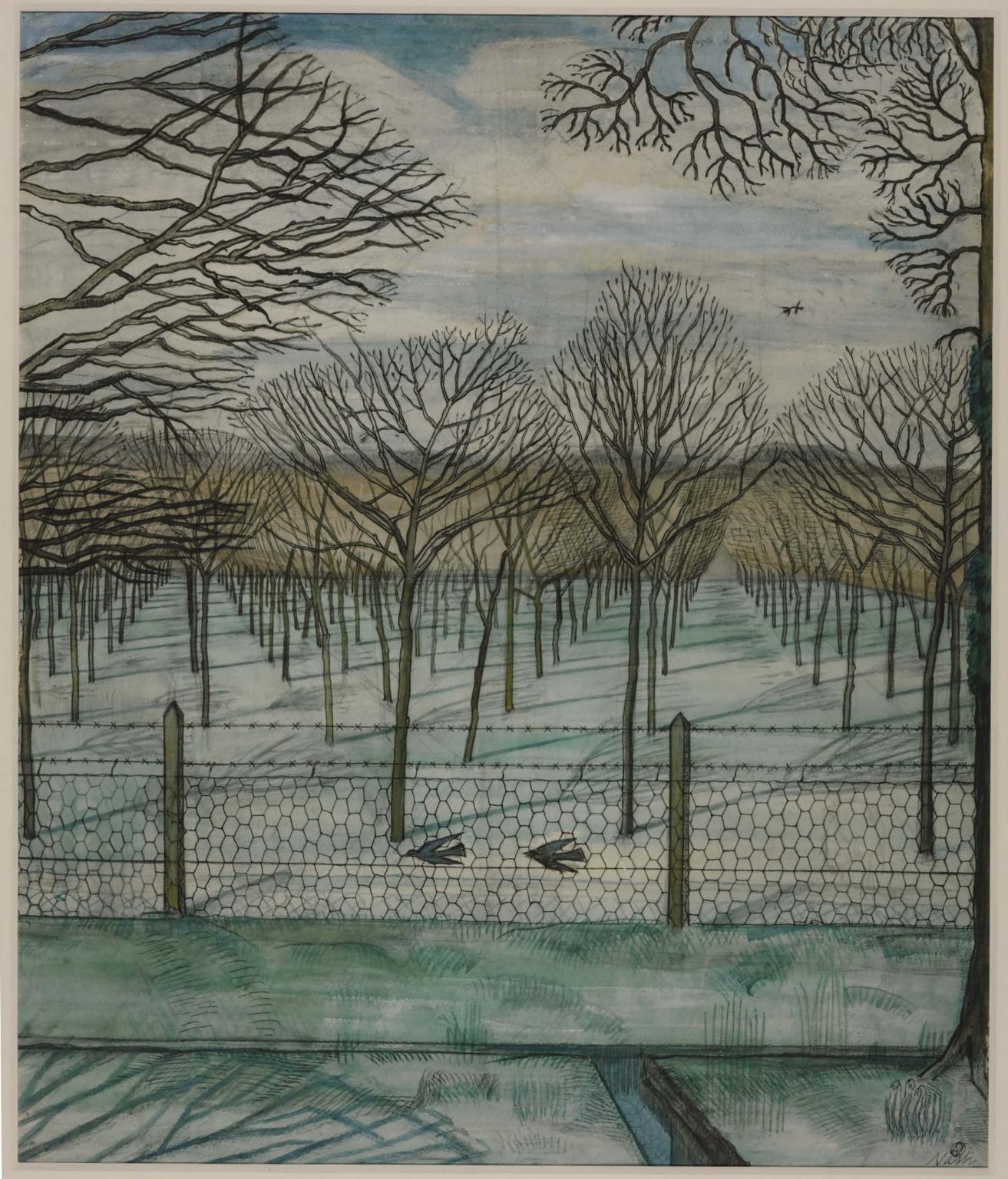 In 1933, Nash formed a group called Unit One which included English artist and sculptor Barbara Hepworth and her husband, the painter Ben Nicholson. The launch of the group was announced in a letter from Nash to The Times newspaper, in which he wrote that Unit One was ‘to stand for the expression of a truly contemporary spirit, for that thing which is recognised as peculiarly of today in painting, sculpture and architecture’.

Although it lasted little more than a year, from January 1933 to late 1934, Unit One was a defining moment both in Surrealism in Britain and more generally in modern British art. The group played a major part in organising the International Surrealist Exhibition in London in 1936, and Equivalents for the Megaliths, which many consider to be one of Nash’s finest works, was exhibited during the two years he was affiliated with the group.

‘I walked in a field near Avebury where two rough monoliths stood up, six feet high, miraculously patterned with black and orange lichens, remnants of an avenue of stones which led to the Great Circle’.  – Paul Nash

Equivalents for the Megaliths, Paul Nash, 1935

The painting was inspired by a visit to see the prehistoric monuments Nash had seen in Wiltshire in 1933. He explains, ‘I walked in a field near Avebury where two rough monoliths stood up, six feet high, miraculously patterned with black and orange lichens, remnants of an avenue of stones which led to the Great Circle. A mile away, a green pyramid casts a gigantic shadow. In the hedge, at hand, the white trumpet of convolvulus turns from its spiral stem, following the sun. In my art I would solve such an equation.’

For Nash, the English landscape was a place in which past, present, nature, and culture coalesced. After doing some rapid drawings and taking several photographs of the scenes before him, he got to work on a series of paintings. ‘The beauty and mystery of the Megaliths was something peculiar’, Nash explains, ‘their colouring and pattern, their patina of golden lichen, all enhanced their strange forms and mystical significance. Thereafter, I hunted stones, by the seashore, on the downs, in the furrows.’

Set within the soft rolling hills of Avebury, Equivalents for the Megaliths, is widely regarded as one of Nash’s most mysterious paintings. He saw in the Neolithic and Bronze Age stones a ‘sinister beauty’ and he longed to reimagine them for Modern audiences. To highlight the sense of mystery he encountered at the site – and allude to the primal magic of the ancient stone monuments – Nash introduced bold geometric forms reminiscent of contemporary Modern sculpture. Such ordered treatment of the landscape was in deliberate contrast to his previous war paintings, which are almost all characterised by chaos, ruin, and disarray. Instead, Equivalents for the Megaliths attempts to reestablish a sense of harmony and balance.

In a letter to the then Director of the Tate Gallery (from 1951), Nash’s widow wrote that Equivalents for the Megaliths had ‘a beautiful design, and is, in my opinion, the most important of the Megalith series of paintings’.

Produced in partnership with Tate, Equivalents for the Megaliths, 1935 is printed on Monte Carlo 300gsm watercolour paper. This premium paper is made on a traditional cylinder mould machine by St Cuthbert’s Mill in Somerset where they have been making fine papers on the same site since the 1700s. They are the only commercial paper mill in England to still use this paper-making process. Mould made paper combines the consistent quality of machine made papers, but with the individual character of handmade papers. A specialist coater adds an ink receptive coating layer, allowing us to print perfectly to conservation standards.