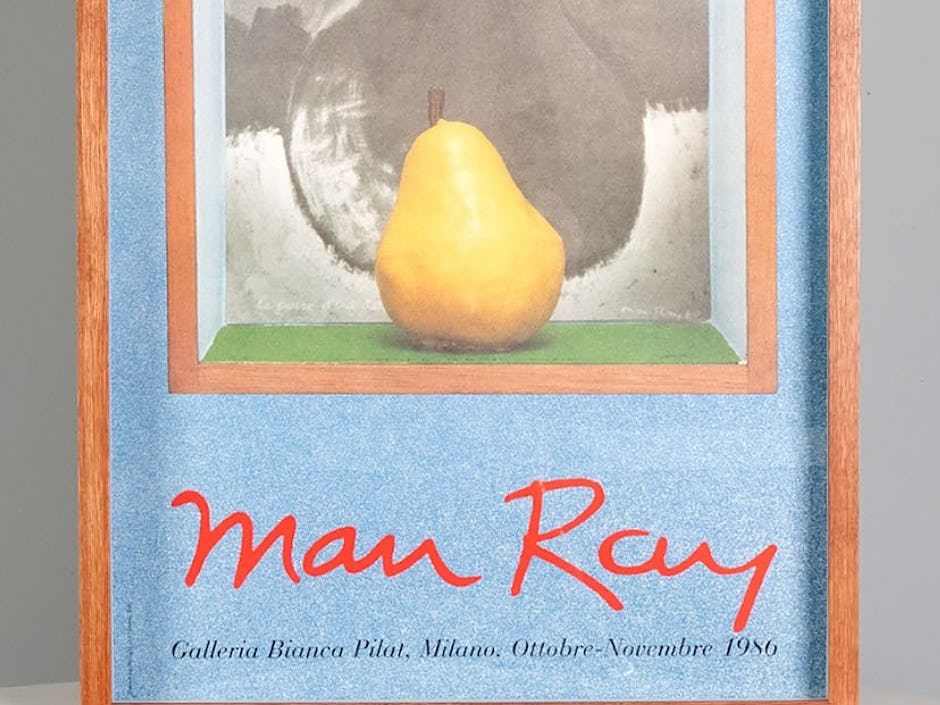 American Surrealist artist Man Ray once stated, ‘I do not photograph nature. I photograph my visions’. Although he worked across multiple mediums – including painting, printmaking, sculpture and video – Man Ray is best known for pushing the boundaries of photography. Join us as we take a look at his accomplished career and the events that led him to create La Poire d’Erik Satie, a sculptural artwork featuring a wax pear positioned against a silver gelatin photograph.

Born in South Philadelphia in 1890 as Emmanual Radintzky, Ray was the eldest child of Russian-Jewish immigrant parents. Fed up of slow Pennsylvanian life, his father moved the family to Williamsburg, New York in 1897. Although Ray’s parents continued to practice Judaism, the family changed their surname to ‘Ray’ to avoid anti-semitism that was rife in America at the time. Young Emmanuel was often referred to as ‘Man’ or ‘Manny’ by his brothers and sisters and, as a result, the artist developed the pseudonym ‘Man Ray’.

Ray’s passion for art started at a young age when he was enlisted by his father to work for his tailoring business. Although he wanted to disassociate himself from his family, tailoring had an undeniable impact on Ray’s artwork. Irons, sewing machines, mannequins and needles are often featured in his paintings and photographs. La Voliere, 1919, one of Ray’s early airbrush paintings, depicts his New York studio complete with a dressmaker’s mannequin he famously kept as a companion.

At school, Ray excelled in art, specialising in freehand drawing and architecture. He visited museums regularly to study works by Old Masters and, by 1912, he had enrolled in the Francisco Ferrer School where he trained under the tutelage of artists like Robert Henri, Samuel Halpert, Max Weber, and Adolf Wolff.

After he graduated, Ray worked as a commercial artist and technical illustrator for multiple companies. During this period, he developed a close relationship with gallery owner and photographer Alfred Stieglitz and became an avid admirer of contemporary European art. His interest in international art accelerated when he befriended French conceptual artist Marcel Duchamp in 1915. Shortly after the two men met, Duchamp created his most famous ‘readymade’, Fountain.

‘Dada cannot live in New York. All New York is Dada, and will not tolerate a rival.’  – Man Ray 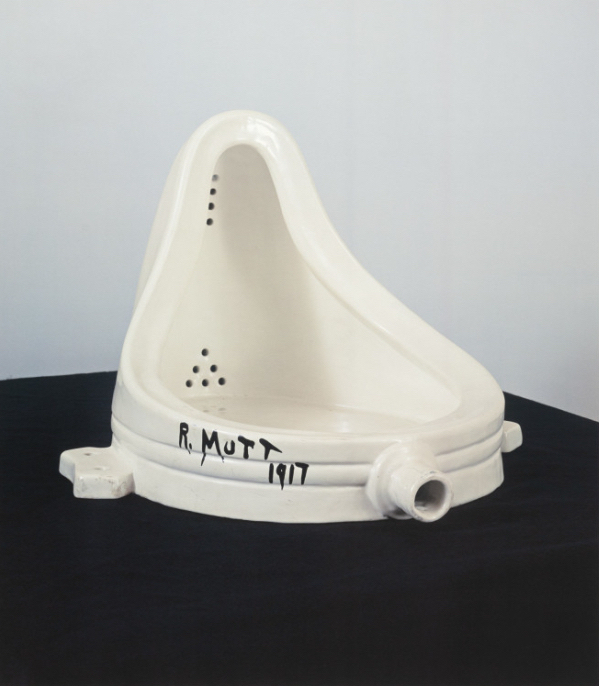 Duchamp had a huge impact on Ray’s artistic career, introducing him to the Dada movement, which was beginning to develop amongst young artists. Dada fought Cubism, Futurism and Expressionism and instead demanded total abstraction. The movement mocked materialistic and nationalistic attitudes which had developed during the First World War, and it soon became a powerful creative influence on many European cities.

Despite multiple attempts by Ray and Duchamp to promote Dadaism in New York, they failed to excite lasting public enthusiasm for the movement. For Ray, Dada’s experimentation was no match for the wild and chaotic streets of New York. Reflecting on that period, he professed, ‘Dada cannot live in New York. All New York is Dada, and will not tolerate a rival’.

Dissatisfied with the American publics’ reaction towards Dada, Ray moved to Paris in 1921. For the next 18 years, he lived in the city’s Montparnasse districts, interacting with some of the most significant members of the modern art world including Pablo Picasso, Gertrude Stein and Salvador Dali.

Infatuated by the development of photography, Ray embraced the medium. Whilst developing photographs in the darkroom, Ray accidentally discovered an optical method called shadow graphing by placing objects directly onto photo-sensitized paper and exposing them to light. He dubbed the technique ‘Rayographs’ and continued to experiment with light exposure for the next 40 years. Nude, Paris, 1928, which depicts the model and actress Kiki de Montparnasse, is a fantastic example of Ray’s ability to manipulate shadow by creating layers.

In November 1921, Ray had his first solo exhibition at the Librairie Six bookstore in Paris, accompanied by a catalogue which included contributions from major Dada artists Paul Eluard and Louis Aragon. At the exhibition’s private view, Ray was introduced to the French composer and pianist Erik Satie.

Although Ray could not speak French, the two conversed in English and their friendship blossomed at a local bar. Satie had a long-lasting impact on Ray’s work, demonstrated by his creation of La Poire d’Erik Satie (The Pear by Erik Satie). The title refers to Satie’s composition Trois morceaux en forme de poire (Three Pear Shaped Pieces) which was first performed in 1912. The artwork features a wooden box which contains a wax pear positioned against a silver gelatin photograph depicting another, much larger pear under an ominous grey cloud.

The unusual presentation is reminiscent of American visual artist and filmmaker Joseph Cornell’s shadow boxes which also contained fragments of photographs and small ornaments. Although the artwork is satirical and nonsensical (making it an exemplary Dada piece), by mounting the pear against a photographic representation of the same fruit, Ray bridged the gap between the subconscious and reality – situating the artwork within the realm of Surrealism.

On November 18th 1976, Ray passed away from a severe lung infection, leaving behind a monumental legacy. His attempts to promote avant-garde art in New York widened the horizon of the American art scene, and his technical experiments changed photography forever. In 1986, marking ten years since Ray’s death, Milan-based gallery Galleria Bianca Pilat held a month-long exhibition dedicated to the artist. Bianca Pilat, the owner of the gallery, was also involved in editing and compiling a catalogue of Ray’s graphic works. The exhibition poster featured Poire d’Erik Satie and was printed by Multipla, Italy.

A piece of history

Inspired by Ray’s ability to blur the boundaries between artistic disciplines, our in-house picture-framer designed a bespoke frame for a rare offset lithographic poster of Poire d’Erik Satie which we hold in our historic archive. Presented in a North American oak moulding – hand-stained to emulate the wooden box Ray created for his original wax pear – and carefully mounted onto our archival 100% cotton core board, this singular piece is protected behind cast acrylic glazing. Keep your eye out for our upcoming release of Pêchage by Man Ray, an additional exhibition poster from 1972 featuring a pendant also designed by Ray depicting three oversized peaches presented in a similar landscape setting.