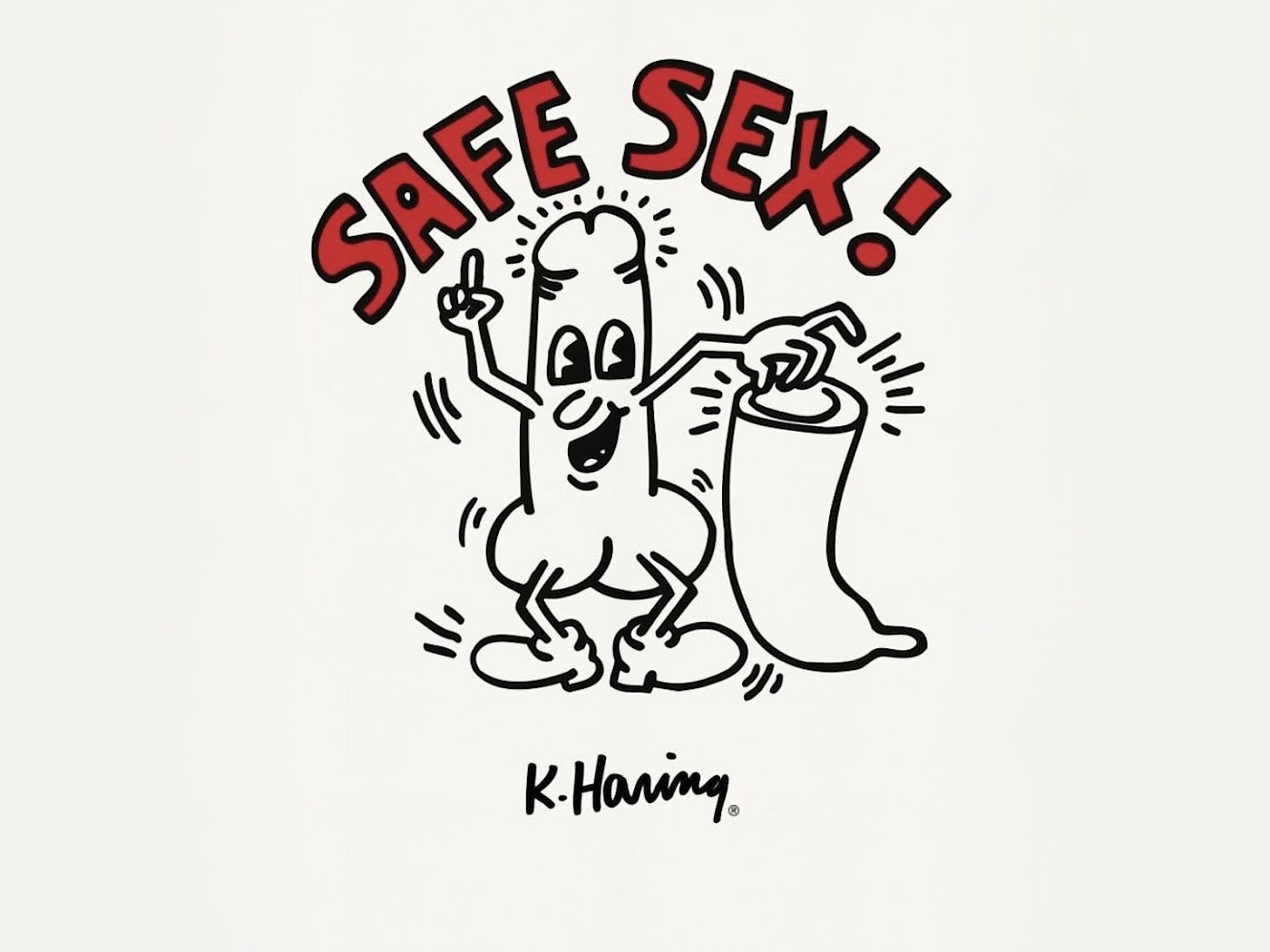 One of the most enduring and eerily prophetic themes in Keith Haring’s work was the AIDS epidemic. Living and working in New York in the height of the sexual revolution, he frequented backrooms and public baths where the gay community commonly hung out. The disease devastated the city and took the lives of many of his peers. By 1987, increasingly weary of watching people die around him, Haring created the artwork Safe Sex! to promote the use of condoms. But, by then, it was already too late for him. Just three years later, he succumbed to the deadly disease. Join us as we look closer at the events that shaped this hugely influential piece, and the bittersweet legacy of New York’s most famous LGTQ+ street artist activists. 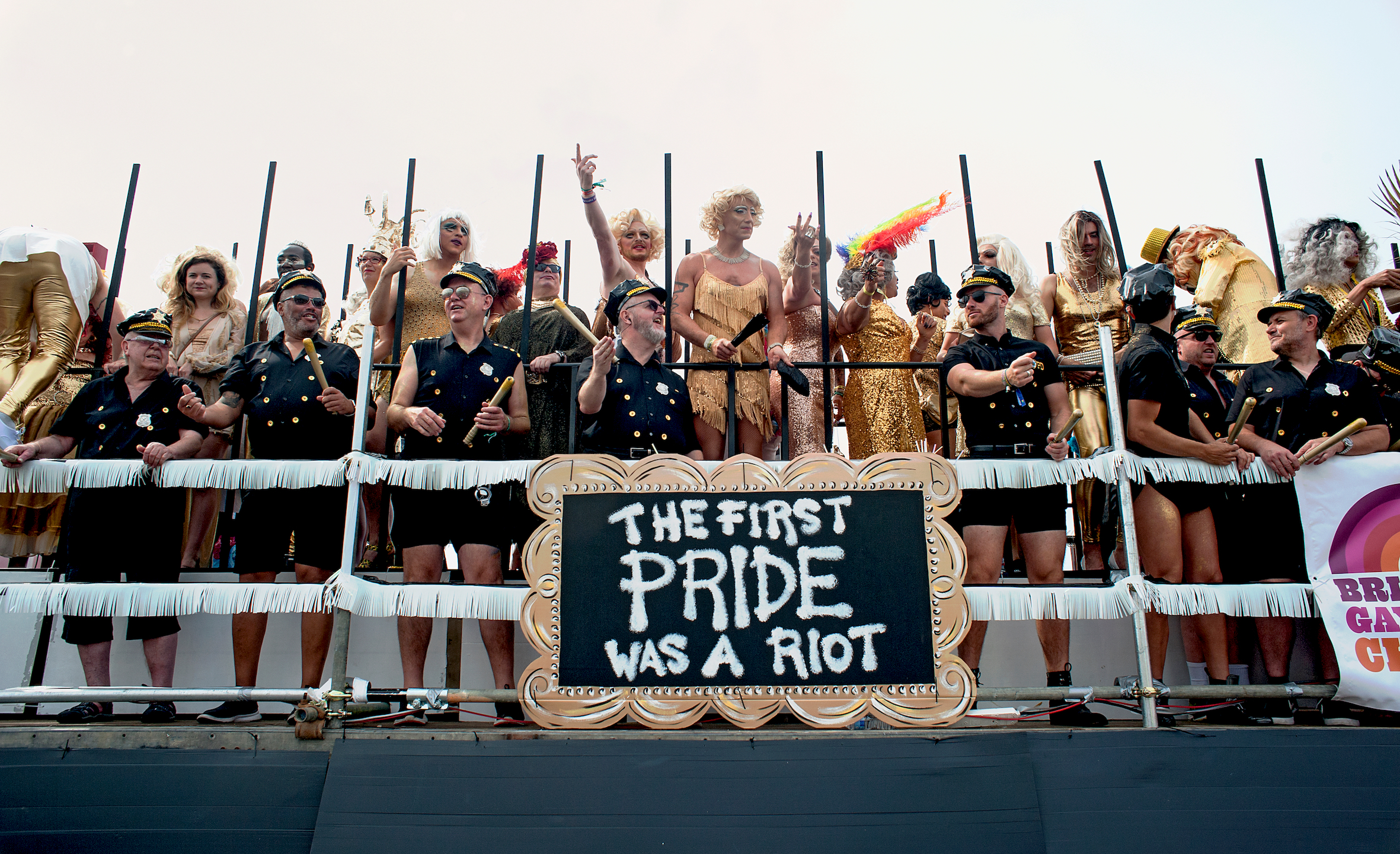 A 50th anniversary of the Stonewall Riots, photo by Philip Reeve, Shutterstock

In the summer of 1969, members of the LGBTQ+ community rioted outside the New York City gay bar, Stonewall Inn. Tired of police harassment on the grounds of their sexuality, they organised a series of demonstrations. When the police became violent and a ferocious struggle ensued, neighbourhood street people fought back. The Stonewall Riots, as they are now known, ignited the gay liberation movement and New York increasingly looked like an attractive place for young creatives from the LGBTQ+ community to live and work. Reflecting on the early stage of his career, Haring said ‘I knew that I wasn’t going to be satisfied with Pittsburgh anymore or the life I was living there. I had started sleeping with men… I decided to make a major break. New York was the only place to go.’

Although the LGBTQ+ community still suffered great oppression, and homophobia was mainstream, its members, like Haring, were increasingly empowered to express themselves. Haring started out by repurposing blank advertising spaces on New York’s subway – using chalk to experiment with silhouetted figures of barking dogs, radiant babies and striking lettering. Soon, he became a notorious but widely respected figure in the underground art scene. He attracted the attention of influential artists and performers, people such as Madonna, Jean-Michel Basquiat and Andy Warhol, who were to become lifelong friends and collaborators. With growing recognition, he experienced a meteoric rise in demand, becoming one of the most famous – and well remunerated – graffiti artists of his day.

But Haring didn’t do it for the money. Examining the entirety of his artistic oeuvre, it’s clear that he was, first and foremost, driven by social causes. Whether he was designing and distributing free posters to end Apartheid (Untitled, 1985), to prevent nuclear war (Nuclear Disarmament, 1982) or to discourage drug abuse (Crack Down! 1986), his art always attempted to protect people – from all walks of life – from the threats he saw around them. Nowhere is that more noticeable than with his work to support the LGBTQ+ community.

To commemorate the twentieth anniversary of the Stonewall riots, Haring created an mural for the men’s room of the Lesbian and Gay Community Services Center in New York (pictured below). In other works, he deliberately drew figures who could not be identified by their age, race or gender. This was Haring’s way of saying that love had no restrictions.

Once Upon A Time, 1989, by Keith Haring. Photo by Alex Galyon, via Flickr. Creative Commons

Yet, the increased liberty that was gained after Stonewall was to be eclipsed by the onset of the AIDS crisis in 1981, to which most of the heterosexual world responded with fear, prejudice, and cruelty. Haring, who openly admitted ‘I’m glad I’m different. I’m proud I’m gay’ worked hard to expose hostilities, becoming increasingly honest about his own experiences and fears. Talking to his biographer John Gruen, he reflected how, in 1985, things had ‘seriously changed in New York, and in my life, because the horror of AIDS had come to light.’ That same year, the State of New York officially sanctioned the closure of gay bathhouses, bars, and clubs as a prophylactic measure. Haring recalled how he ‘had to start being selective and much more aware of what you were doing, and who you were doing it with [...] I didn’t stop having sex, but had safe sex or what was considered and understood to be safe sex at that point’. 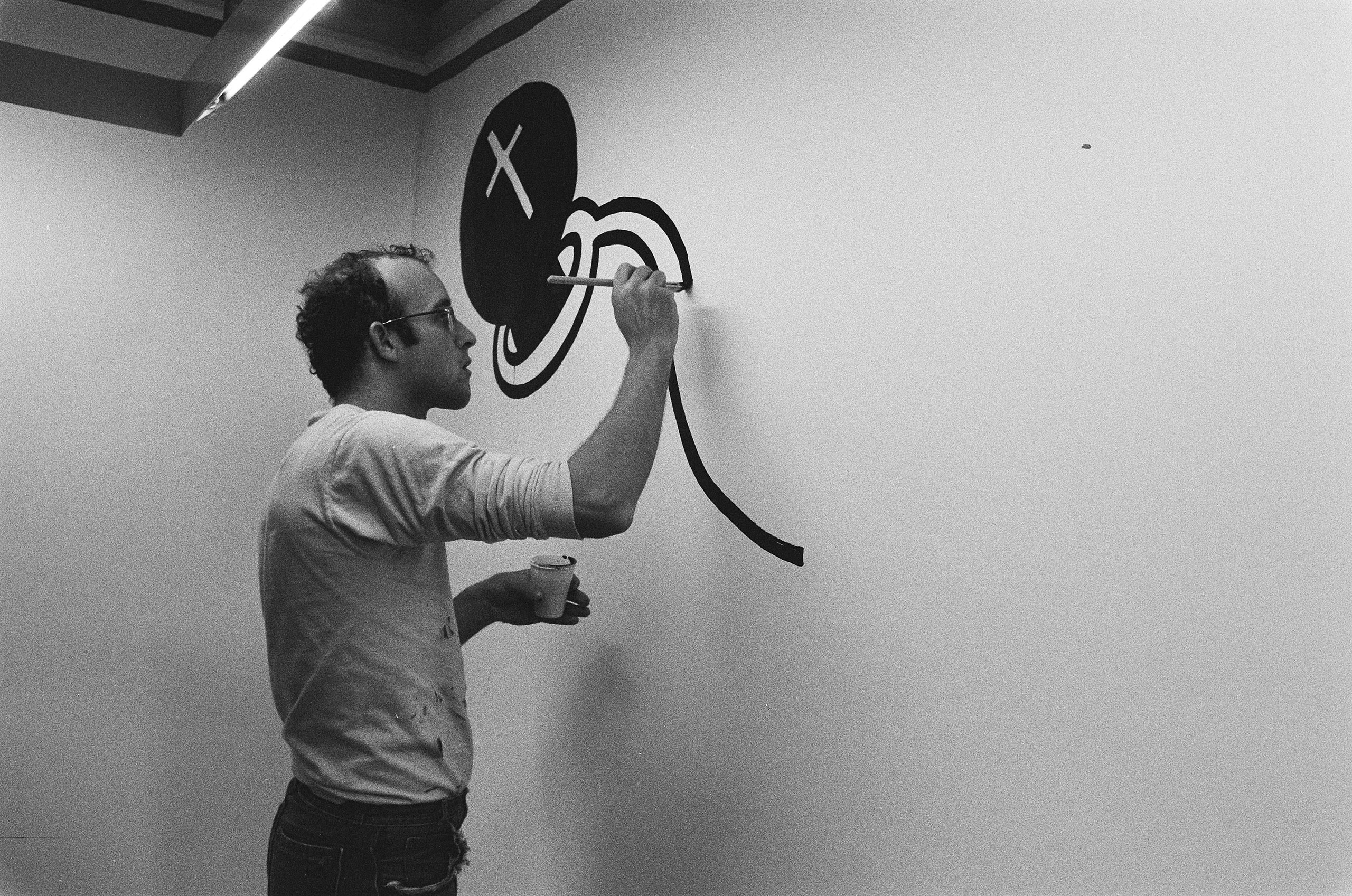 Such changing attitudes and behaviours were reflected in his work. Keen to reach a wider, more diverse audience – beyond the museum elite – he rented a ground floor space on Lafayette Street on lower Broadway from where he could exhibit and present his socially-motivated designs. From his famous ‘Pop shop’, he produced t-shirts, buttons, postcards, watches, and apparel. But his greatest legacy was his posters. Cheap to produce and easy to distribute, he used his posters to educate the gay community about the ways they could reverse the stigma towards them and, ultimately, protect each other.

Safe Sex! Is just one of many promotional designs he made to encourage people to wear condoms. It featured on t-shirts, magnets, and even condom cases. Light hearted, graphically striking, and socially resonant, it epitomises the art he strove to make. Indeed, Yoko Ono, who met Haring through Andy Warhol, observed how he tackled ‘very, very serious subjects [...] in a humorous, even uplifting way.’

Talking to Gruen, Haring explained that he wanted to create art that was less ‘serious’, less ‘untouchable’. After all, he proudly confessed, ‘My support network was not made up of museum and curators but of real people. And that’s good because everything I’ve ever tried to do was cut through all that bullshit anyway.’ Such vision and simplicity proved effective in communicating how urgent it was for everybody to recognise and respond to the early AIDS crisis.

Haring wrote in his journal in 1987: ‘I’m not really scared of AIDS, not for myself. I’m scared of having to watch more people die in front of me again.’ But tragically his luck was destined to run out. Fernando Pivano, an Italian writer and friend of his, described how, when Haring was told he had contracted the disease, ‘he didn’t believe it at first [...] he walked to the bank of the river in New York, covered his face with his hands, and wept, for hours, with sobs that only grew in intensity’. But, after that moment of reckoning, something changed for Haring. According to Pivano, although he was mortally ill, Haring ‘was able to work, even more frantically than before, to prepare the world for his art and to fill every accessible space in it with his little men, his playful babies, his inimitable tangles of lines and colors, the pages of his journals in which he put down forever his beautiful, tragic story.’

A year after his diagnosis, Haring set up The Keith Haring Foundation to provide funding and support to AIDS research, charities and education. A year later, he created Untitled, 1988 in which he dubbed the deadly virus ‘devil sperm’, creating a demoniacal embodiment of a horned sperm cell erupting violently from an egg attacking a defenceless male figure. He also became more involved with the AIDS activism group ACT-UP, appropriating their slogan in one of his own works with the same title Silence = Death, 1989. Another two-panelled piece took an even more macabre turn. Untitled (For James Ensor 1), painted in the summer of 1989, it shows a skeleton ejaculating on a flowerbed and, in the the second panel Untitled (For James Ensor 2), the dead man’s sperm causes flowers to bloom and reach out towards the sun, while the skeleton smiles menacingly. Whether he knew it at the time or not, the artwork held a painful foreboding. Haring died the following spring.

Though he passed away aged just 31, Haring’s lifework changed the course of LGBTQ history. In 2014, he was made one of the inaugural honourees in the Rainbow Honor Walk in San Francisco, a walk of fame celebrating LGBTQ people who have ‘made significant contributions in their fields.’ In 2019, he was declared one of 50 American ‘pioneers, trailblazers, and heroes’ inducted on the National LGBTQ Wall of Honor within the Stonewall National Monument outside Stonewall Inn. Heartbreaking though his end was, Haring’s tireless work for social causes made him a giant of his generation. His legacy lives on through his work.

We’re immensely honoured to work with Artestar who, along with the Keith Haring Foundation in New York, have given us license to produce accredited designs of Keith Haring’s iconic posters. Safe Sex! is just one of 20 posters we produce by Keith Haring.