Born in Kharkiv, Ukraine, to French parents, A.M. Cassandre (1901–1968) is responsible for creating some of the most recognisable Art Deco designs for luxury French travel companies. We delve deeper into the journey he took to become one of the most sought-after designers of his generation.

A.M. Cassandre spent his formative years between Ukraine and France, before permanently moving to Paris with his parents in 1915. After very briefly attending the prestigious Ecole des Beaux-Arts in Paris in 1918, he studied in Lucien Simon’s studio, at the Académie de la Grande Chaumière and at the Académie Julian.

As a commercial illustrator whose work was characterised by symmetry and geometric forms, many of his commissions were for the newly-modernised luxury transport industry. Attracting passers-by who dreamt of transatlantic trips to faraway destinations, Cassandre’s poster designs encouraged would-be travellers to sail across oceans on modern cruise ships.

Normandie, which was commissioned by the Compagnie Générale Transatlantique in 1935, is arguably one of Cassandre’s most famous works. Elegant, streamlined, and pictorially reductive, the poster highlights the ship’s maiden transatlantic route with deftly executed typefaces advertising a voyage from Le Harve, through to Southampton, England, before finally harbouring in New York.

Viewed by many as a floating palace of Art Deco design, the Normandie was the largest, and considered one of the greatest, Ocean Liners of all time. The grandeur of the ship was so extravagant, it was nicknamed the ‘Ship of Light’, echoing the epithet for the French capital, Paris, the ‘City of Light’.

A master of dynamic composition, Cassandre accentuated Normandie's proportions by composing an extreme upward-facing, geometric perspective – a clever visual technique that forces the viewer’s eye up the ship’s immense geometric bow which looms high above the water.

Commissioned in 1927, Nord Express is a masterclass in composition. Looking up from a low angle Cassandre amplifies the viewer’s perspective, accentuating the power of the locomotive as a towering feat of modern engineering.

Keen to channel the innovation of the newly-available travel network, Cassandre also included of a delicate wisp of steam, making it float from the engine – cutting through the poster's dramatic capitalised titled – as it races towards a distant horizon.

Designed to enlist the attention of prospective European travellers, the poster tempts with destinations they might visit including London, Paris, Brussels, and Berlin.

Cassandre believed that typographic elements should work cohesively with his chosen imagery. Integrated type that complemented forms was integral to creating a unified design which ultimately improved each poster’s commercial success.

Whilst passengers travelled aboard these high-powered locomotives, they were met with equally enticing refreshments. Cassandre designed Restaurez-Vous au Wagon-Bar in 1932 and its aim was simple: to advertise a French train’s new Wagon Bar and its gastronomic offerings.

With its simplified geometric forms – representing a siphon seltzer bottle, a water glass with straws, a wine bottle with an accompanying glass, and a tempting, fresh baguette – the poster catered to the appetites of aspirational French diners.

Cassandre chose to drive the advertisement’s message home by overlaying the bar’s offerings on top of the steam locomotive’s wheel.

Watch how we emboss all of our accredited A.M. Cassandre fine art prints with a special King & McGaw Editions stamp. 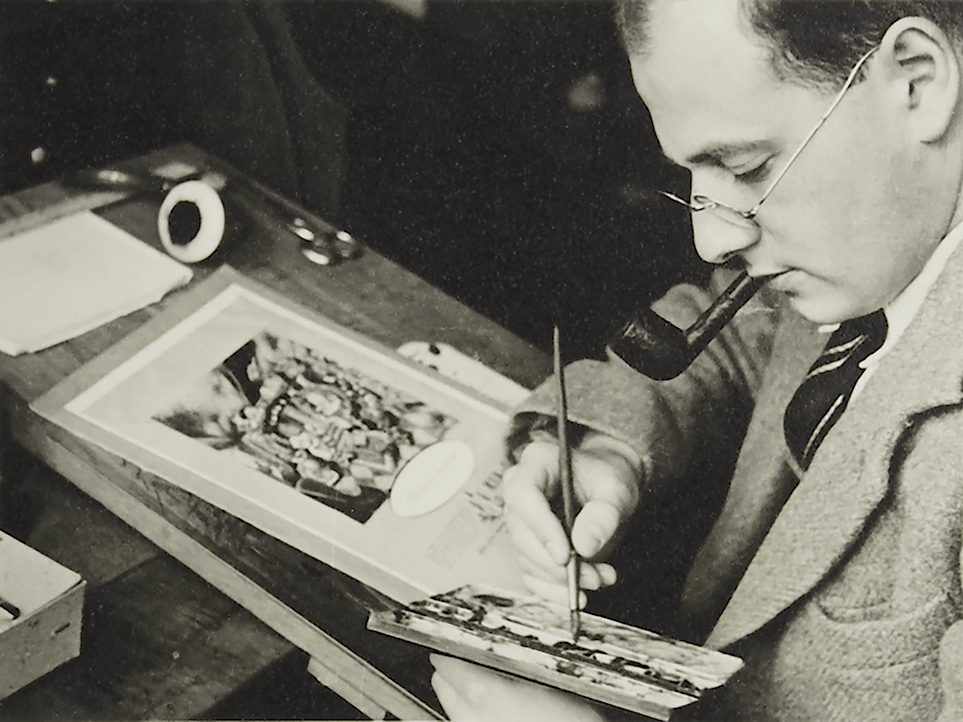 A life in music: Gerard Hoffnung