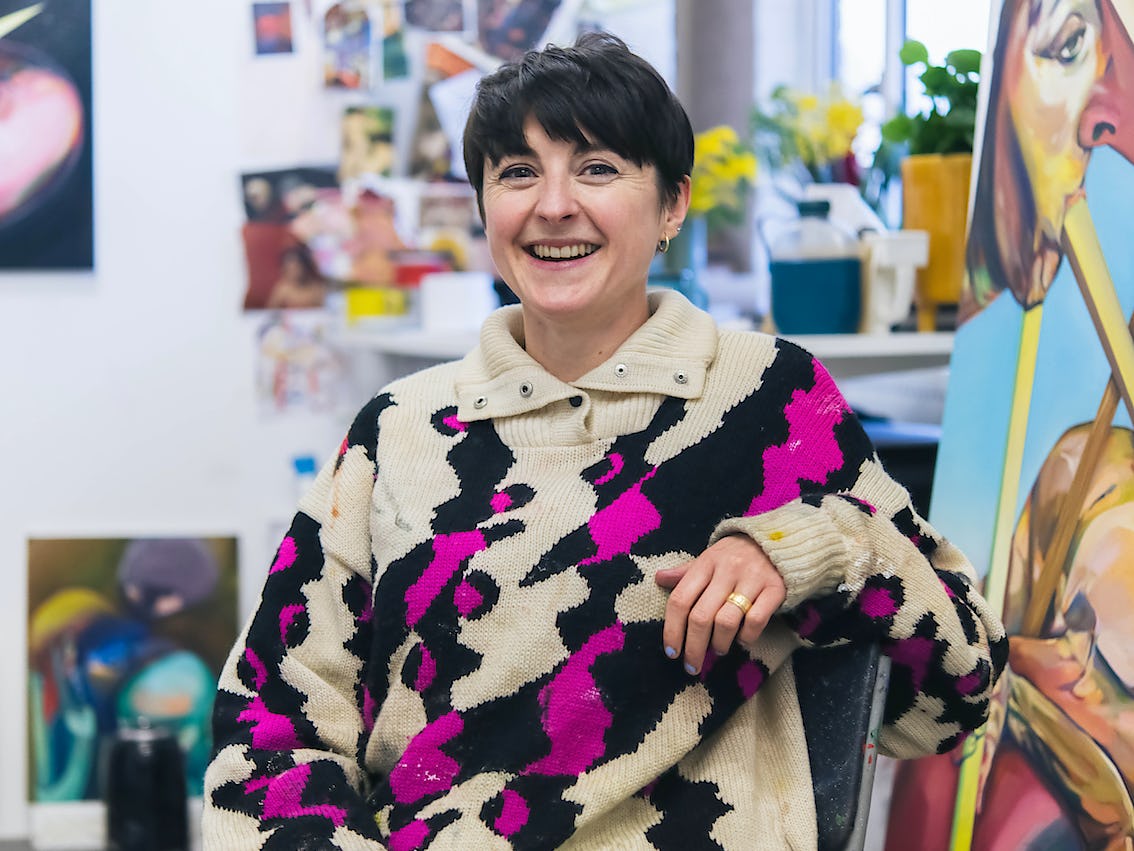 For London-based painter Emma Cousin, our bodies are the sites through which we experience the world, and the possibilities are endless. Join curator Becca Pelly-Fry as she talks to Emma about the depiction of phenomenological experiences, how she playfully flips metaphorical meanings, and the edition she’s making for our soon-to-be launched Curated Editions collection, New Mythologies.

I actually ended up going to art school accidentally. I was selected to go on a taster day session for a law course at Oxford but I slept in. I ended up going into the art building by accident and I read the Ruskin School of Art’s prospectus. It felt like it was literally written for me at that moment. I had always drawn a lot as a kid so I think it was a natural decision. I’d done GCSE and A Level art (I had an incredible art teacher Mr Pete Dryland, who seriously encouraged me and made me think I was quids in for it!) so, in a way, it was predestined. But I’d never considered it as a life option until that point.

It’s funny because most of my family weren’t artistic but my granddad, who worked in a factory, used to draw cartoons and I remember being amazed about how he could make us laugh with his drawings. And my other granddad, who died before I was born, was also a painter. I think those connections really helped me when I was younger because it made me see that there was a history attached to my own interests, perhaps that it was in my genes somehow. I wasn’t a total blip.

Why did you decide to focus on the human figure as a central mechanism in your painting?

At the Ruskin School of Art I was painting a lot of bodies and there were different obsessions with different body parts – belly buttons, a whole penis section and so on. Anatomy also fed into that too, of course. But now, I use bodies to build systems and to explore phenomenological experiences. Our bodies are the sites – the vessels – we experience the world through.

For me, it’s really exciting to think about skin – how it stretches, gravity’s effect upon it, how it ages, its weight, and how it protects the inside and outside of the body. Ironically, I feel like we’re often quite disconnected from our bodies. We project psychological boundaries. My work tries to explore that.

A mood board in Emma Cousin’s studio

‘I often twist and flip meanings metaphorically but also literally – rotating, oscillating or tessellating an image – to achieve a new perspective.’

Your figures come together to create visual metaphors and often relate to verbal or written language, can you talk us through that relationship?

Yeah, I’m interested in what might happen if we weren't dependent on language or what happens already when language starts to fail. Language constantly misfires which is why new language is reinvented. I’m fascinated by portmanteau words – words that blend together to make a new word – such as ‘scave’, which combines ‘scared’ and ‘brave’.

I often take an idea which is metaphorical or linguistic, like an idiom, or something which, if taken literally, starts to mean all sorts of other things. ‘Cutting your nose off to spite your face’ is a good example. The idea that someone might chop off their nose and then ponder where else it could go in order to ‘spite their face’ is fascinating as a creative device. I could draw about that all day.

I use metaphors as a way to explore composition, colour, and balance, but also as a way of communicating. I often twist and flip meanings metaphorically but also literally – rotating, oscillating or tessellating an image – to achieve a new perspective. Sometimes, I present all the ideas at the same time which dismantles any sense of original meaning.

‘As a painter, there are some really pleasurable aspects about colours: How they feel, each one has a weight to it – a gravity – but also a viscosity and a transparency which shifts.’

Can you tell us a bit about your use of colour? It seems metaphorical rather than representative or realistic?

I recently had a lung infection and I found out that bacteria involved in the infection masquerades as blood so that it isn’t found. So I’m also interested in how the flags of colour can be almost camouflage themselves, and that happens in the body all the time. For instance, our blood is red but our veins are blue. Hot and cold. Dead or alive. I’m interested in messing with those assumptions.

As a painter, there are some really pleasurable aspects about colour too: How they feel, each one has a weight to it – a gravity – but also a viscosity and a transparency which shifts. Colour overlays also do all sorts of other things. I like to explore what colours can do simultaneously: describing skin temperature, and moving inside of the body and an emotion all at the same time is something I'm really excited about.

Your figures often oscillate between playful and serious, joy and horror – how do the emergence of these feeling operate within the painting?

The playful aspect of pushing and pulling is definitely fundamental to making the figure. The stretching of the characters is really important too: I allow them to be ridiculous, but how real do they need to be? Are the limbs realistic or do they look more like tools?

I might, for example, distend a nose whilst thinking about Pinocchio and clowns. Or I might be thinking about nicknames – I used to be called Concorde as a kid – and I’ll put a triangle on the front of a face.

What role does drawing play within your artistic practice?

Drawing is totally fundamental, it underlies everything. It’s like my way of thinking working out the world. Often, if I don’t understand something, I’ll try and draw it. As a kid, I used to have recurrent nightmares and my mum used to get me to draw them and then we’d either burn them or rip them up. Perhaps drawing has become a coping mechanism for life. Once you realise you can channel it and realise that it’s part of your process, then it becomes a really enjoyable aspect of being and communicating.

Can you tell us about the edition you’ve made with King & McGaw?

I wanted to respond to the idea of making a print by thinking about why we use printing to make an image, what can it offer/limit and what does it naturally facilitate? I always start with an idea or a wordplay and then I use the figure/s to ideate. I liked the concept of the bodies taking this idea on physically, playing with screen printing to ‘make’ their bodies and interfere with one anothers’ bodies. By using the limit of a primary palette the bodies can then mix colours with themselves when they overlap, also altering their sense of depth – who is behind, inside, or on top of who? 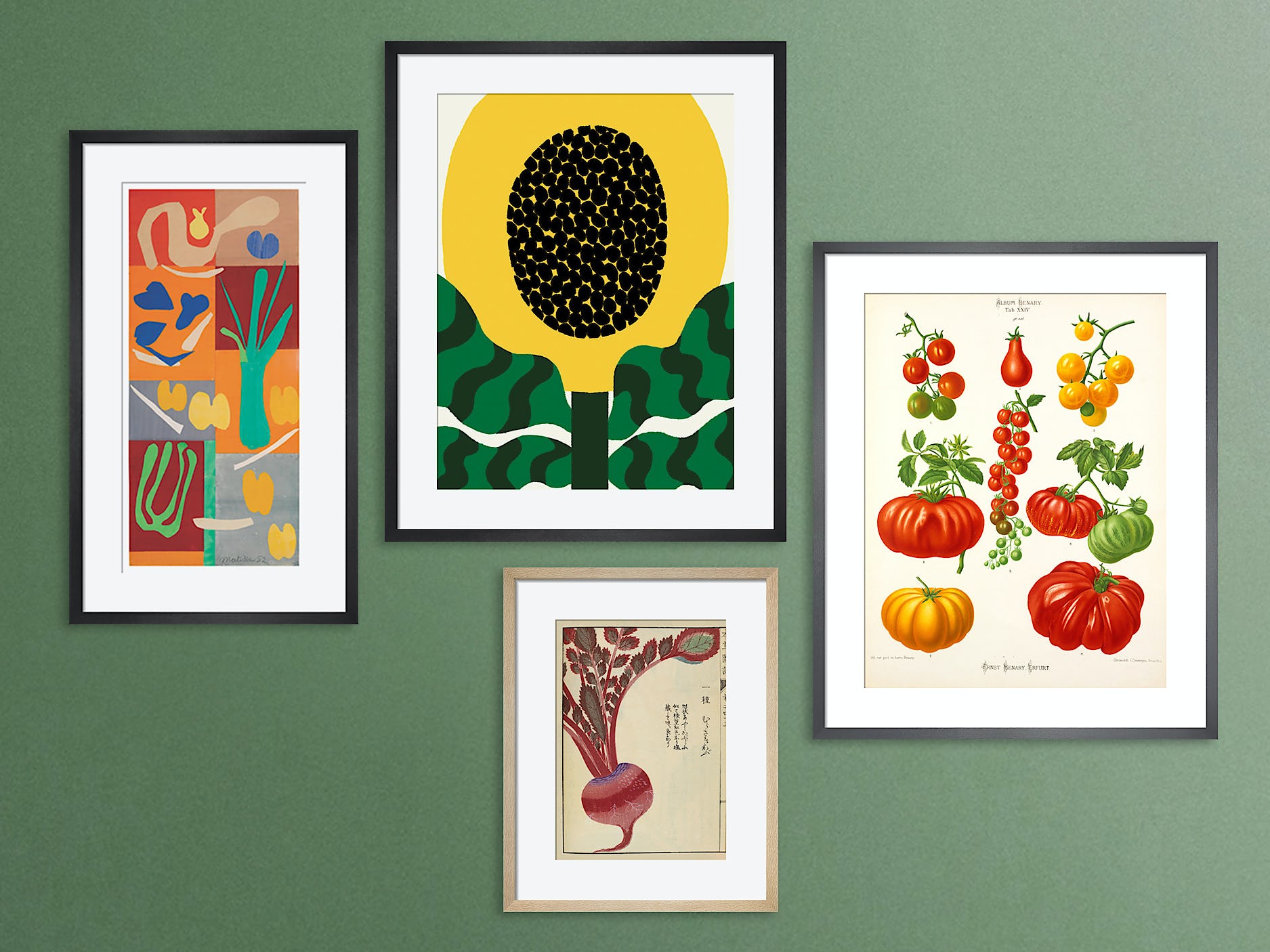 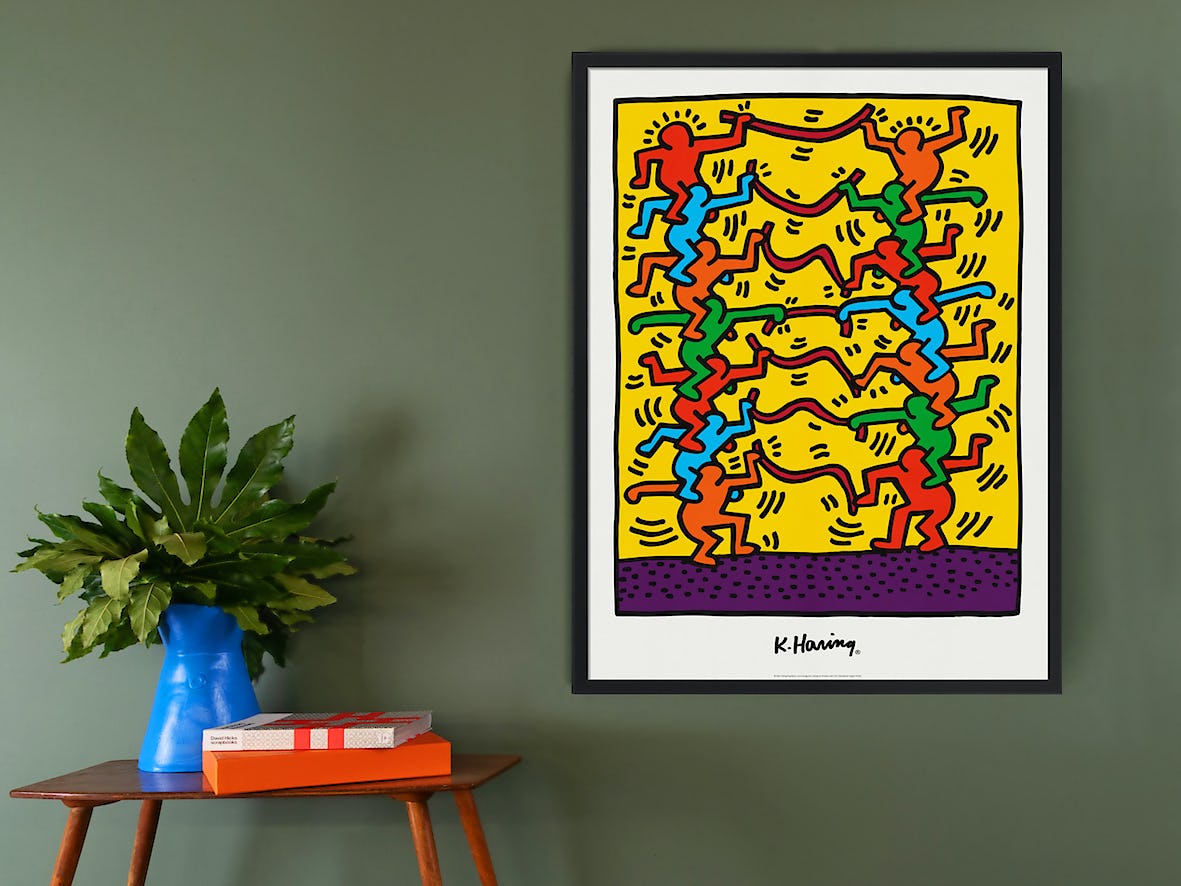