Most wished for: Rare artworks 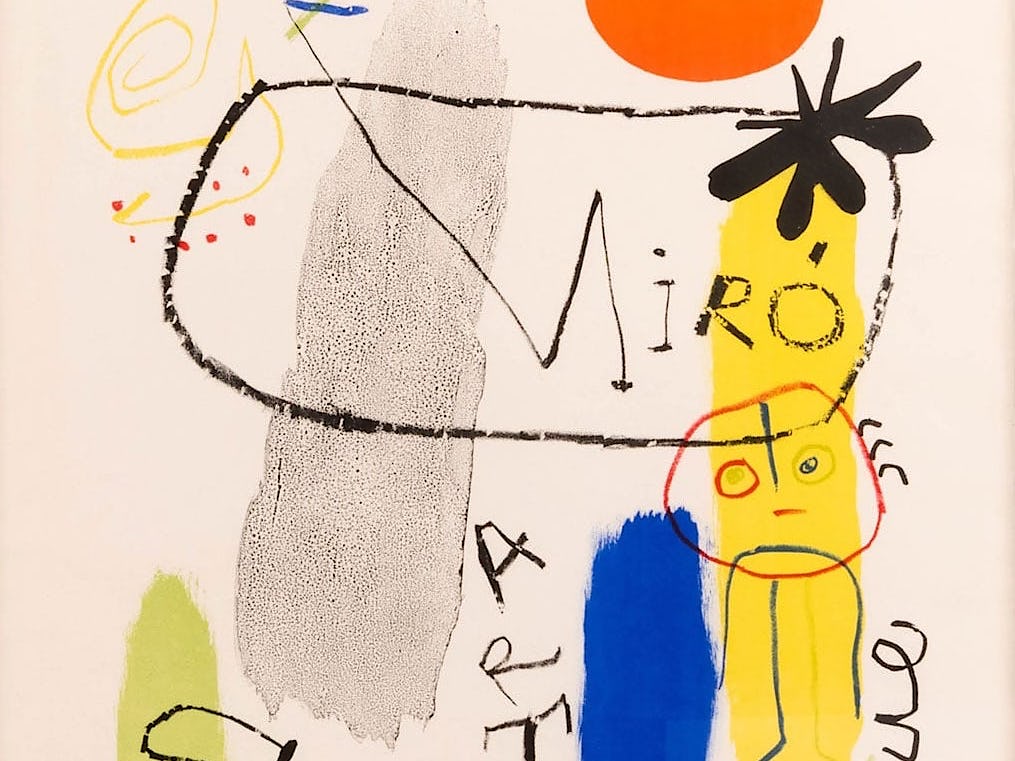 This holiday season, we’ve curated a selection of artworks our customers covet most. From modern masterpieces by Joan Miró to arresting portraits of Pablo Picasso, discover the rare artworks on everyone’s King & McGaw wish list. 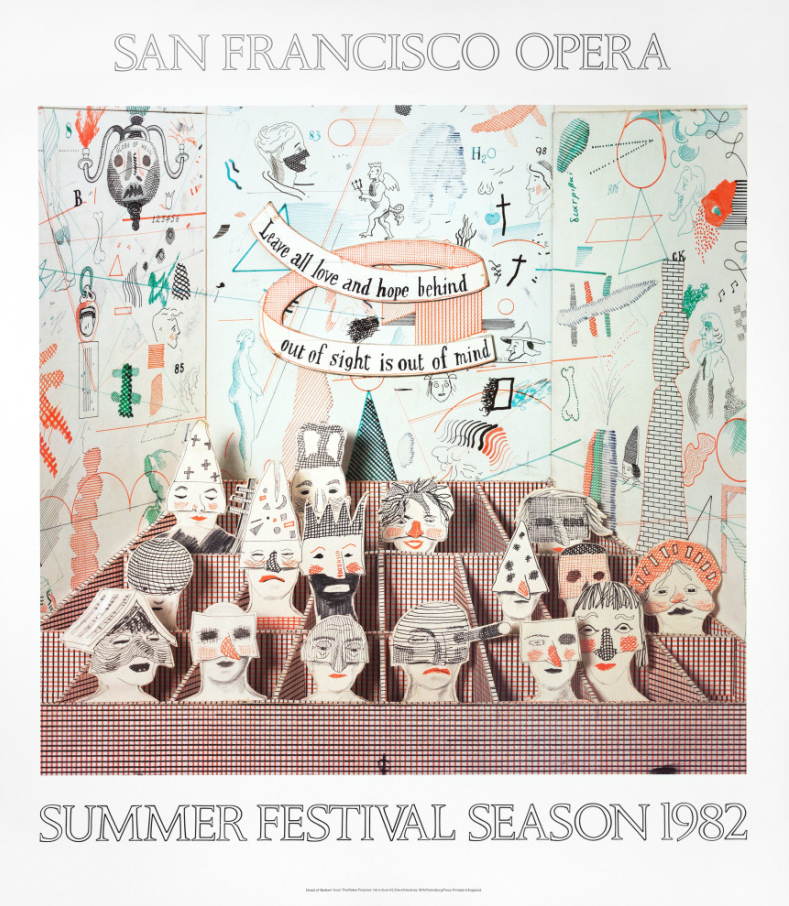 Though he is famous for his sun-drenched Californian swimming pools and technicolour Yorkshire landscapes, Hockney also created lesser-known set designs and theatre posters early on in his career. Just four years after graduating from The Royal College of Art, he designed the revival of Alfred Jarry’s Ubo Roi for London’s Royal Court Theatre. In the early 1970s, he created a now rare lithograph poster advertising Tony Richardson’s production of The ThreePenny Opera at the Prince of Wales Theatre.

By 1975, he received his most exciting theatrical commission. Tasked to create enormous set designs and costumes for Igor Stravinsky’s production of the Rake’s Progress at Glyndebourne Opera House, he got to work on a range of immersive drawings. One of them being this fantastic poster which was reprinted for the San Francisco Opera Summer Festival Season.

Loosely based on William Hogarth’s Rake’s Progress paintings created between 1733 and 1735 (which Stravinsky had seen displayed in an exhibition in Chicago in 1947) the opera told a story of decline and fall. The protagonist, Tom Rakewell deserts Anne Truelove for the delights of London with his friend Nick Shadow. However, Shadow turns out to be the devil. After several misadventures, all initiated by devious Shadow, Tom ends up in the notorious London psychiatric hospital, Bedlam.

Channeling Hogarth’s original engravings, Hockney used crossing hatching and parallel lines to create perspective. This rare, near mint offset lithograph poster showing his design for the Bedlam scene is a masterclass in theatre set design. The section of the opera's libretto, which was written by W.H. Auden and Chester Kallman features centre stage for this final scene: ‘Leave all love and hope behind / Out of sight is out of mind.’ To those who accused Hockney of neglecting painting for theatre, he replied with characteristic defiance: ‘I’ve never treated the theatre as a sideline, nothing I do is sideline.’ 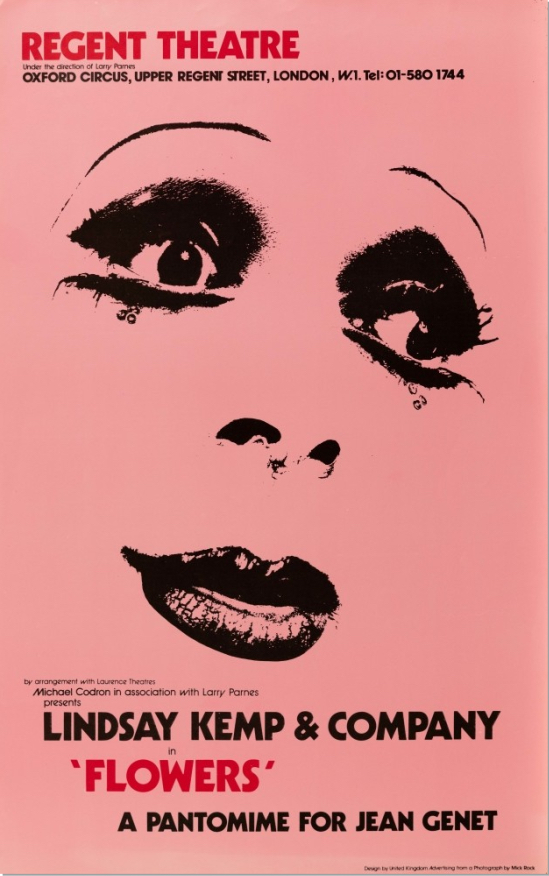 As soon as he’d finished reading it, Kemp knew he could already see it on the stage, ‘I could see myself as Divine’ – a drag queen who plays the protagonist and dies of tuberculosis. Within two weeks, his theatrical vision had become a reality.

A potent production performed by ten close-knit actors, Flowers took theatre-goers on a dreamlike journey to destruction, through seduction, shock, laughter, and poetry, and went on to tour internationally for many years to great acclaim. This original 1970 poster from our Rare Theatre Poster collection advertising the infamous play is in very good condition with light signs of handling. 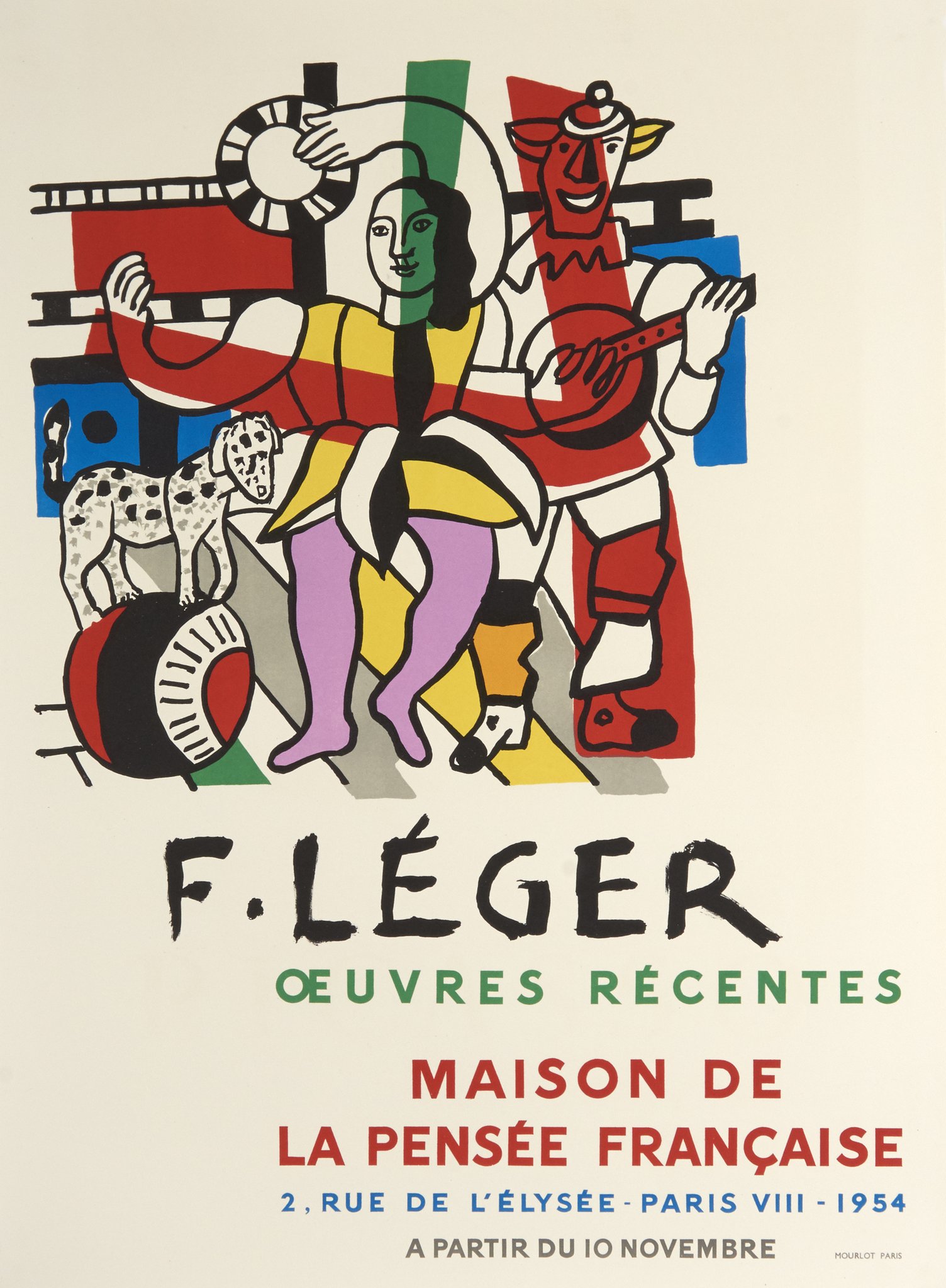 Throughout his four-decade long career, Léger was often inspired by the circus. As a boy, he was enchanted by the touring circus troupes that passed through his hometown of Argentan in rural France. Enthralled by the death-defying acts acrobats could pull off in the big top, he wrote in 1924 that the circus was, ‘an absolutely marvellous world.’

This traditional stone lithograph printed by Atelier Mourlot in 1954 shows a stylised circus woman with fashionably cropped hair and a ribbon-edged tutu. Holding a tambourine high above her head, she is positioned either side of a sweet spotty dog balancing on a ball and a jovial clown playing a banjo.

Léger picked up these pictoral references from his visits to Cirque Médrano in Paris – a big top which was also popular with his contemporaries; Degas, Renoir, Seurat, Lautrec, Picasso, van Dongen and Chagall. When war broke out, he was forced to flee to New York. It was there that he became a fan of the three-ring Ringling Bros and Barnum & Bailey circus – which still advertises itself as ‘the greatest show on earth’.

With its dazzling world filled with acrobats and harlequins, tumblers and riders, the circus gifted Léger with constant creative inspiration. It was a place of spectacle and showmanship but, above all, a symbolic space for freedom.

‘Since the earth is so round, how can you play square? […] A circus is a rotation of volumes, people, animals, and objects. The awkward, dry angle is not at home there… Go to the circus! You leave behind your rectangles, your geometric windows, and enter the land of circles and action… The ring is freedom; it has neither beginning nor end.’

Before he became a successful artist, Catalan-born Joan Miró  (1893–1983) initially went to business school. As a teenager he begrudgingly worked as an office clerk but he abandoned the business world completely after suffering a nervous breakdown. Although he experienced frequent episodes of depression, he found solace in painting. Much to the dismay of his father, he enrolled at a fine art academy and, by 1918, he had his first solo show at the Galeries Dalmau.

As his career matured, he became a pioneer of Surrealism. His love for uninhibited and illogical surrealist works was born out of his contempt for traditional painting methods. In 1927, he even declared his intentions to ‘assassinate painting’ altogether. In practical terms, this meant becoming a lively advocate of ‘automatic drawing’; a practice that involved giving radical creative license to the unconscious mind. Characterised by childlike scrawl and simplified or symbolic language, Miró’s automatic drawings soon caught the eye of Fernand Mourlot, the director of Mourlot Studios print shop in Paris.

In the late 1940s, Miró made frequent visits to Fernand’s studio. Mourlot observed him as a quiet, calm artist who worked steadily on his prints. At the encouragement of Georges Braque, Miró ended up creating over 1000 lithograph prints. Many of which, like Affiche D’Exposition, still survive today – each a testament to the careful hand of the dedicated draftsman. With its fantastical, lyrical fields of uncanny references, and dynamic composition, this artwork is an excellent example of automatic drawing. Rare and collectible, it’s an undeniable highlight from our UNIQUE collection.

This arresting portrait was taken by American photographer Arnold Newman in 1954. Newman is celebrated for photographing the likes of Piet Mondrian, Marilyn Monroe, Audrey Hepburn, and even famously camera-shy Henri Cartier-Bresson. When he took his portraits, Newman always made sure the surroundings added to the composition and the understanding of the person.

'No matter who the subject was,' he told American Photo magazine in 2000, 'it had to be an interesting photograph. Just to simply do a portrait of a famous person doesn't mean a thing.'

In Picasso's case, Newman accentuates his weathered and worn right hand and his piercing brown eyes. After all, together, they were the vehicle to his success; helping him play with perspective, and – ultimately – revolutionise the way we see art.

Famously used in Apple's 1998 'Think Different' ad campaign (which highlighted the inspirational work of other trailblazers such as Mahatma Ghandi, Muhammad Ali, and Martin Luther King Jr.) Picasso's portrait is steeped in history. Kept in good condition with minimal signs of wear, this offset lithograph published on semi-gloss poster paper has become a coveted collector's piece. 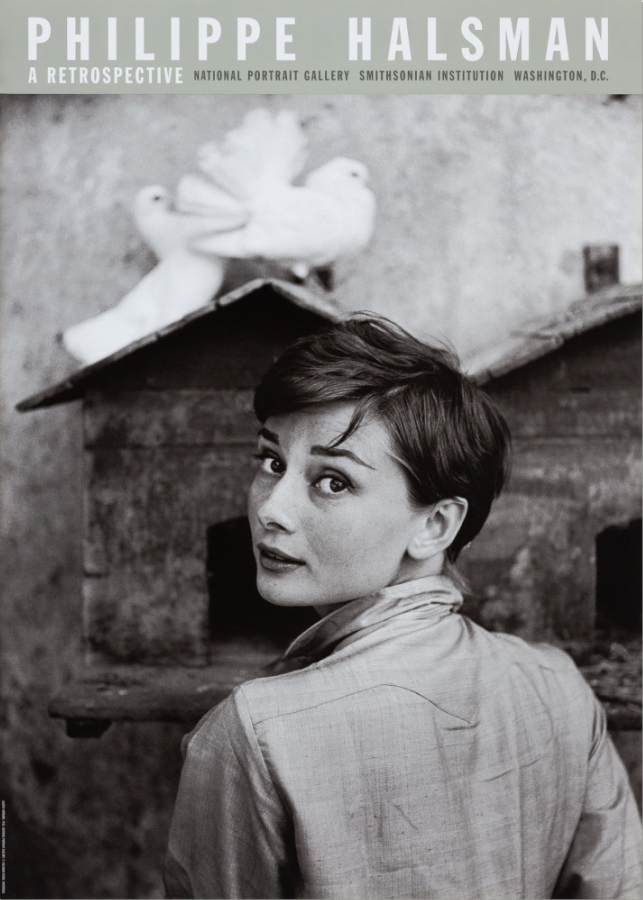 Best known for his portraits for Life Magazine from the 1940s through to the 1970s, American portrait photographer Philippe Halsman is a giant of the photography world. Born in Riga, Latvia, he admitted catching ‘the photography virus’ at the age of fifteen when he stumbled across an old view-camera in his parents’ attic. After shooting a few photos of his sister by a window, he developed them in a make-shift darkroom in his bathroom. The experience, he explained in his autobiography, ‘was one of the most magical moments of my life.’

By the 1930s, he had began contributing to fashion magazines such as Vogue. Renowned for producing unconventional and closely-cropped images that were sharp rather than in soft focus, he soon gained a reputation as one of the best portrait photographers in France.

His impressive portfolio included prominent figures of the post-war years, including artists and film stars like Marilyn Monroe and Audrey Hepburn. This incredible portrait of Hepburn casually glancing back at the viewer was taken in 1955. In 2001, it was transformed into an exhibition poster in conjunction with ‘Philippe Halsman – A Retrospective’ at the National Portrait Gallery, Smithsonian Institution.

Our wish lists are a fantastic place to store your favourite artworks. We’ve put together this guide so you can make the most of its curated features. Create your wish list today. 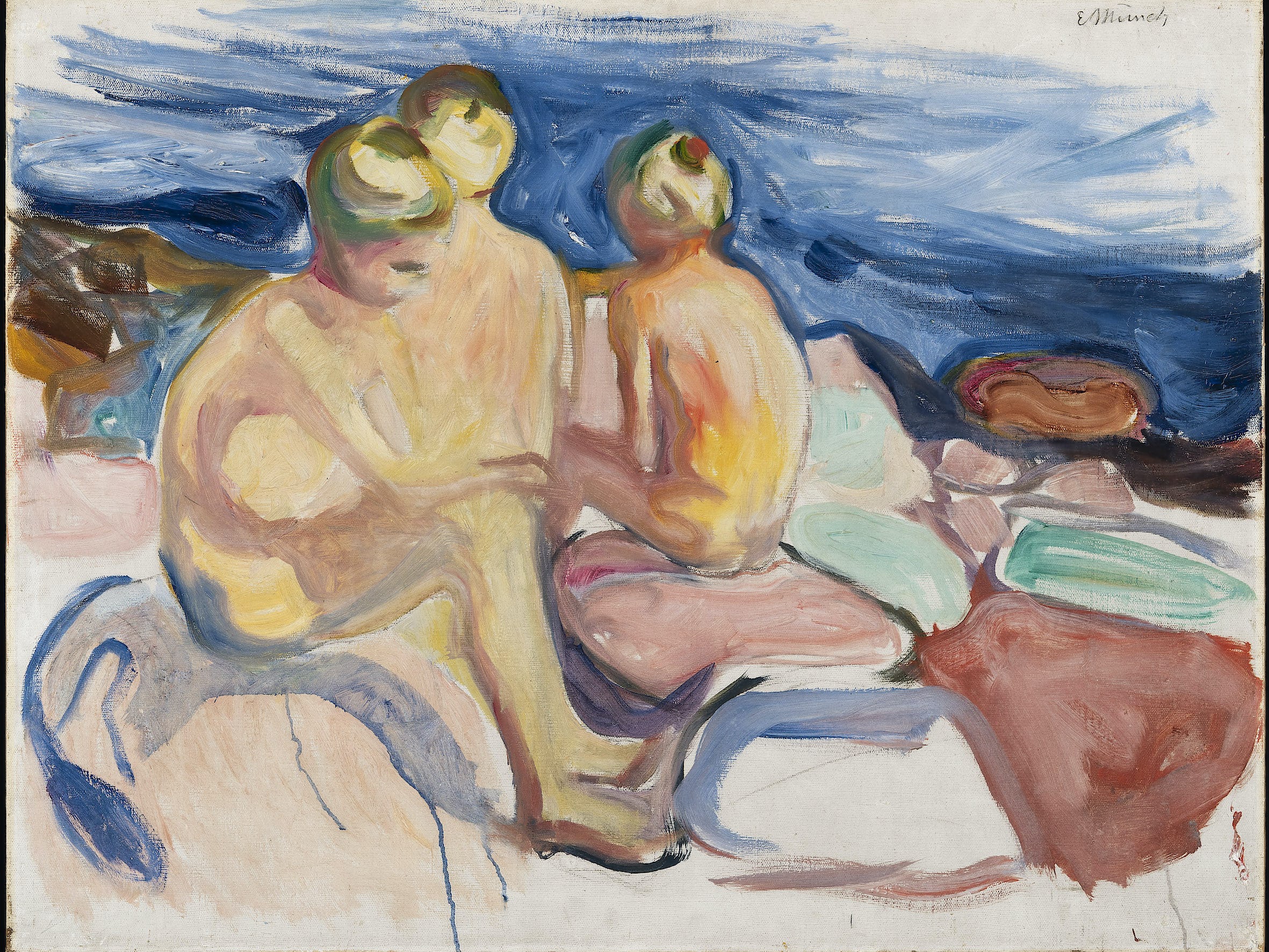 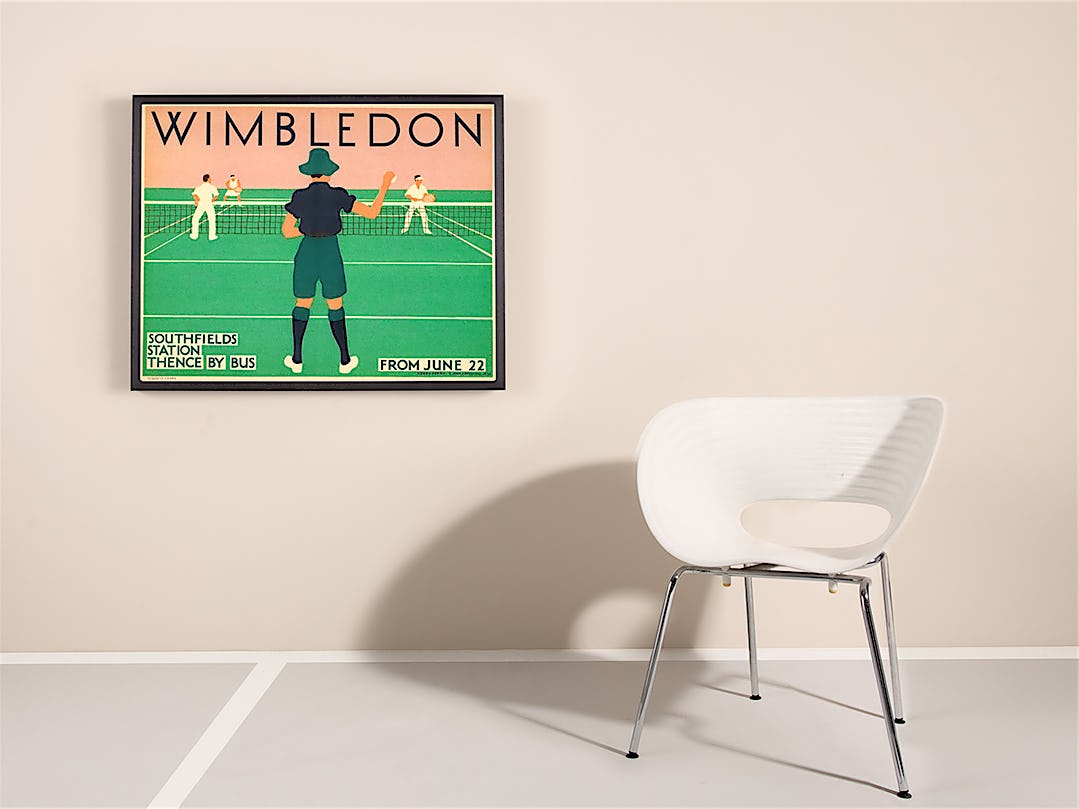 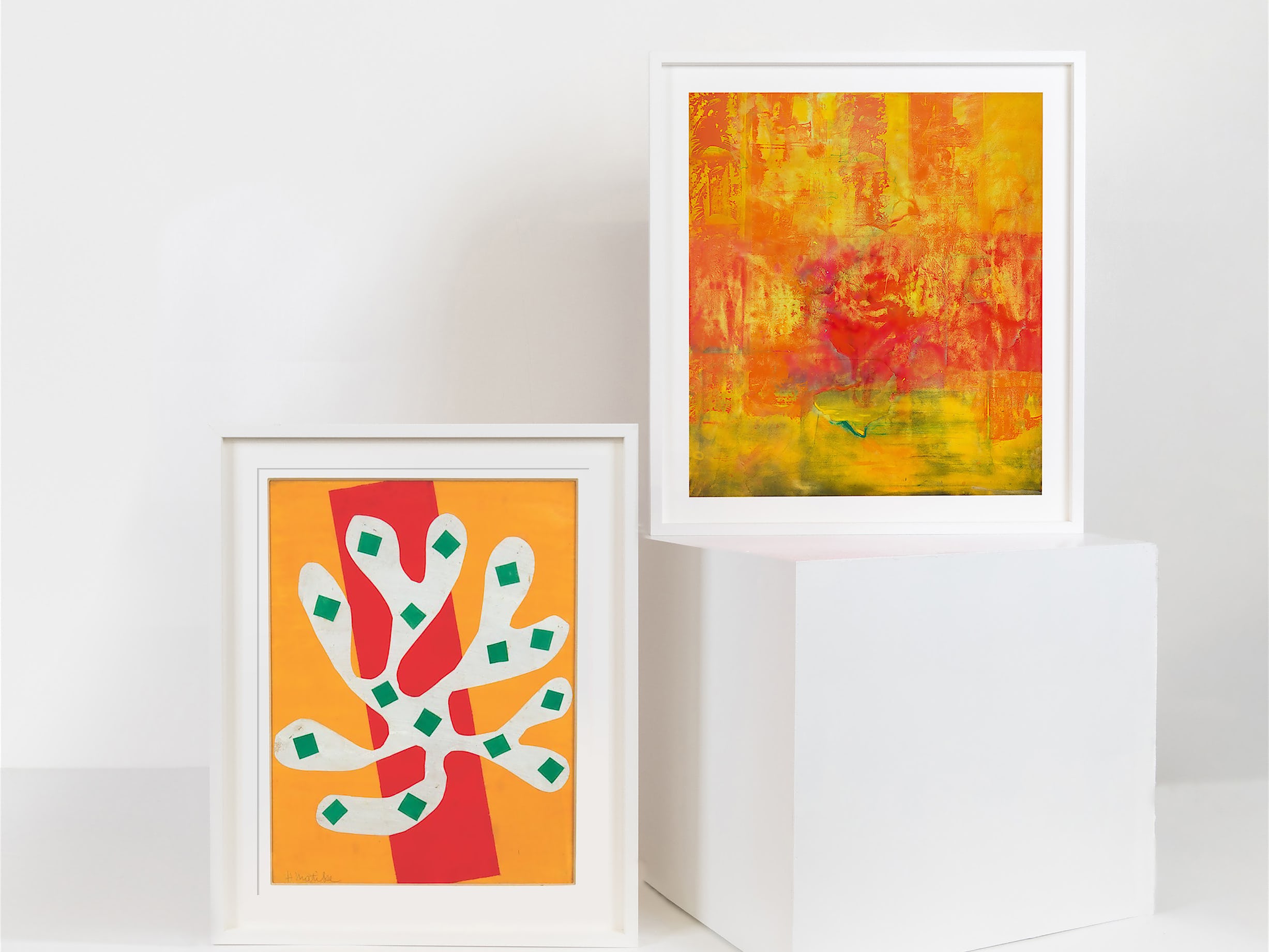