Anonymous
7 hours ago
Verified
The range of prints is outstanding and the website is clear, functional and incredibly easy to navigate. I have bought 2 framed prints and will be purchasing more over the coming months. The quality is excellent as is the communication post-purchase and delivery.
Mike
12 hours ago
Verified
So pleased with the print I received. Quality is excellent and delivery was as expected. Will be using again.
Judith
1 day ago
Verified
Excellent service and a beautiful picture. We are very pleased with it and looks lovely hung on our wall.
Stephen
2 days ago
Verified
Your website was very easy to use and delivery was as expected with very good quality packaging. The quality of the picture we ordered is excellent. Overall a good experience and we will have no hesitation in using your company again and recommending you to our friends and family.
Anonymous
3 days ago
Verified
Delighted with the quick delivery, of a reasonably priced print which arrived in good condition and well protected.
Will
3 days ago
Verified
Brilliant art. Brilliant quality. Brilliant all-round experience. Haven&#039;t got a bad word to say about it.
Anonymous
3 days ago
Verified
Very happy with the print! Also happy with the speed of service and the prices.
Anonymous
4 days ago
Verified
Lovely print arrived right on time and looks great in our living room.
Christine
4 days ago
Verified
My 2nd order of 2 framed prints didn&#039;t disappoint. Superb quality. Well packed. Speedy delivery. Would 100% recommend.
lynn
5 days ago
Verified
I&rsquo;m really enjoying my London themed prints . All arrived in perfect condition.
Julie
5 days ago
Verified
My purchase was even more stunning than I expected; beautifully framed, carefully packaged and safely delivered.
Tracie
6 days ago
Verified
We have ordered 3 prints now. From ordering to delivery,the service has been excellent. Would highly recommend to anyone.
Mrs
1 week ago
Verified
I know nothing about art but very much enjoyed looking at your website I was impressed by the reviews When the picture came it was exactly as you said but better in real life Since then l have enjoyed the emails showing artists I have never heard of and would never have looked at their work All in all very pleased Thank you
Angus
1 week ago
Verified
Great choice of framed artwork at alright prices. Delivered on time in good condition.
Chris
1 week ago
Verified
Incredible choice, great service, brilliant on time delivery. Will definitely be ordering more!
Jillian
1 week ago
Verified
Excellent service. My print arrived very quickly and packaged well. The print is beautiful quality, exactly as described and looks fabulous on the wall.
Mrs
1 week ago
Verified
Excellent workmanship and beautiful prints. I wish they had more old masters though. I will pop back frequently to find what I like.
Babita
1 week ago
Verified
Beautiful prints and they look so lovely on the wall. Very happy with them and the great service I received to get them to me very quickly.
Anonymous
1 week ago
Verified
Really happy with the Rothko I purchased from King and McGaw. I love the variety of prints they have available and the quality of the product!
Ben
1 week ago
Verified
Lovely artwork
Lynne
1 week ago
Verified
Have just received a beautiful framed Rothko print beautifully packaged and we are thrilled with it. The quality of the print and the workmanship in the frame are second to none and we have a lot of artwork to compare this with. The price is so reasonable and wouldn&#039;t hesitate to buy from this great company in the future- can thoroughly recommend and don&#039;t hesitate to buy! 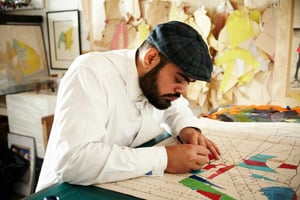