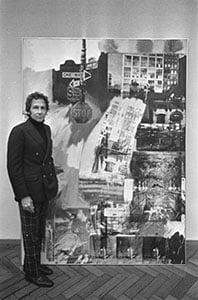 Robert Rauschenberg (1925-2008) was a prominent American avant-garde painter and graphic artist. Rauschenberg is well-known for his 1950s ‘Combines’ that merged sculpture and painting in a radical break from the two dimensional canvas. Regarded as an important influence on the Pop art movement, he used commercial imagery and mass produced objects in his work. In 1993 Rauschenberg was awarded the National Medal of Arts and in 1995 he received the Leonardo da Vinci World Award of Arts.