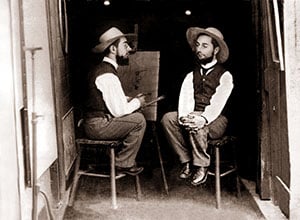 Toulouse-Lautrec’s iconic work is instantly recognisable. He is renowned for his use of lithographic printing which became the key to his success as an artist. During the Belle Epoque his lithographic posters could be found pasted up all over Paris. Designed to celebrate and promote the Parisian cabaret scene, Lautrec’s illustrations advertised venues like the Moulin Rouge. His posters became so fashionable that his importance as a painter was almost forgotten. He even developed a special painting technique which made his painting look similar to his lithographs. Owing to their everlasting popularity, Lautrec’s iconic posters were later faithfully reproduced on the stones of Atelier Mourlot.