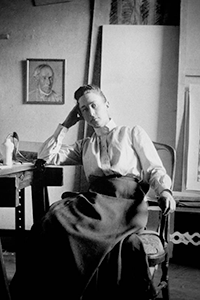 Hilma af Klint (1862-1944) was a ground-breaking Swedish artist who began creating  radically abstract paintings in 1906, several years before the first abstract work by Kandinsky in 1911. Convinced that the world was not yet ready to understand her paintings, af Klint kept them largely private and stipulated that they remain hidden until twenty years after her death. When the artist died in 1944 she left behind 1300 unseen abstract works and more than 125 notebooks.
Hilma af Klint’s style is defined by her unprecedented, vivid colour palette and original use of scale and composition. Her work explores different aspects of cosmic and human evolution in an effort to visually describe spiritual views of reality, reflecting her deep interest in the natural world and the connection between the spheres of the visible and invisible.
In 1986 Hilma af Klint’s work was rediscovered, and in the subsequent decades her work has received major critical recognition and gained an incredible popularity among contemporary audiences. In 2019, the Guggenheim held a survey of her work titled ‘Hilma af Klint: Paintings for the Future’ that attracted a record breaking number of visitors to the museum.