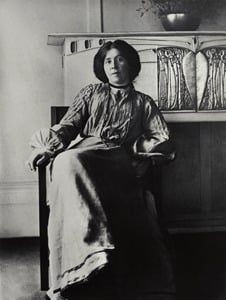 A prominent member of the “Glasgow School” movement, Margaret Macdonald Mackintosh was born on 5 November 1865 in Tipton near Wolverhampton. By 1890, the family had relocated to Glasgow where she and her sister Frances enrolled as students at the Glasgow School of Art.

While studying at this progressive art institution, both sisters became acquainted with Jessie Newberry, Ann Macbeth and Jessie M. King, and forming an art collective known as The Glasgow Girls. Working within a variety of media including metal, embroidery and textiles, their style was massively inspired by Celtic imagery, literature, symbolism and folklore. At the beginning, their works were not to everybody's taste and were dismissed as being “spooky” due to the unnatural depictions of the human form.

In 1892, the two Macdonald sisters were introduced to architectural students Charles Rennie Mackintosh and Herbert MacNair. Noticing similarities in the style of their work, they were encouraged to collaborate on projects and soon formed “The Glasgow Four”.

Margaret worked closely with Charles, and the pair were soon married. As a couple, they worked on futuristic interior designs, which, even by today's standards feel decidedly modern. Margaret's art would heavily influence Charles' life and his architectural work, and their roles as artist and designer blurred and became symbiotic once they started working together. The couple is most famous for their late-Victorian tearoom interior commissioned by their patron, Catherine Cranston.

Between 1895 and 1924, Margaret had exhibited in over 40 exhibitions throughout Europe and America. Charles reputedly declared that Margaret had genius, while he had only talent and that she was half if not three-quarters of all his architectural works. Although overshadowed by Charles, Margaret Macdonald Mackintosh has been generally acclaimed to be a leading talent in early 20th century British art. Due to poor health, Margaret stopped producing work and died in 1933, five years after her husband's death.