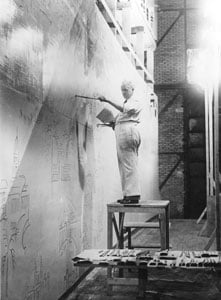 Raoul Dufy (1877-1953) was a French artist and textile designer who has left a considerable legacy of Fauvist paintings, drawing and ceramics - as well as Art Deco printed fabric - that prove him to be one of the world's greatest colourists. In 1952 he was awarded the Grand Prix at the Venice Biennial and sadly died a year later in 1953. Dufy's work seems to have sustained him, for he remained active as an artist even when terminally ill.

The subject matter of his paintings is famously happy, as he produced many pleasure-filled images of French leisure activities like horse races and regattas. With hyper-intense colours, his style is both avant-garde and decorative.