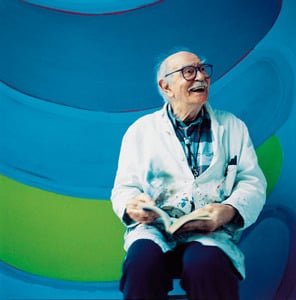 Sir Terry Frost RA (1915-2003) is recognised as one of the leading British abstract artists of his generation. He discovered his talent for painting as a prisoner of war during the Second World War. After returning to England Frost attended Camberwell College of Arts, London, and taught extensively throughout the UK. He was appointed Professor of Painting at the University of Reading, and was elected a Royal Academician in 1992. In 1998 he was knighted for his services to art. Terry Frost's career spanned six decades and his work is held in museums and galleries throughout the world. To coincide with his 85th birthday, in 2000 the Royal Academy staged a major retrospective.