The artworks that made Andy Warhol

From early illustrations to now-iconic silkscreens, celebrity portraits to multimedia artworks, we take a look at some of the artworks that made him one of the most influential artists of the twentieth century. 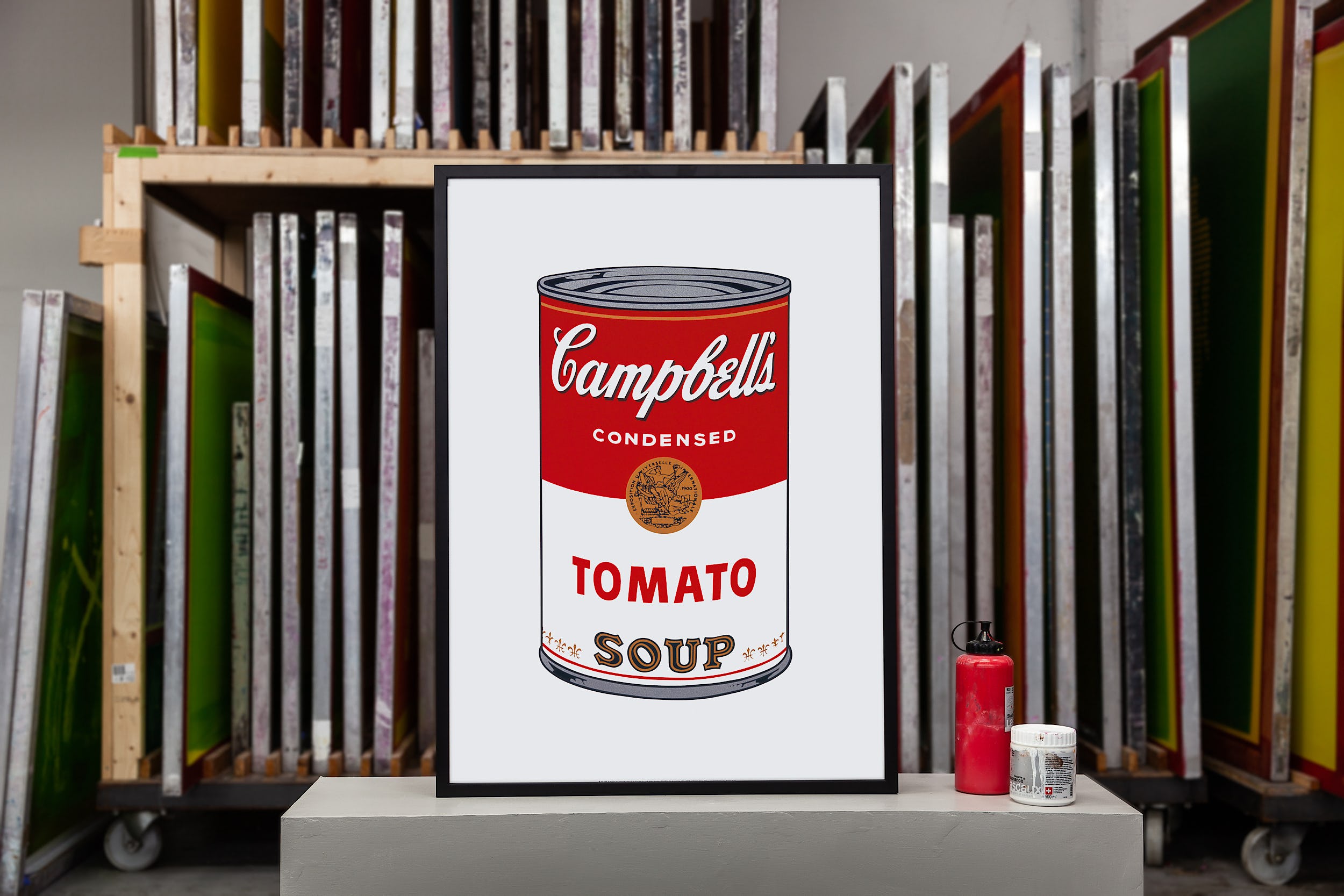 After studying pictorial design at the Carnegie Institute of Technology, Warhol set his sights on a career in creative advertising. In 1949, at the age of 21, he moved from a Rusyn ghetto in Pittsburgh, Pennsylvania to New York.

Initially, he worked as a window dresser and as a commercial artist for Glamour, Vogue and Seventeen. His first major break came when he produced a series of whimsical illustrations for I. Miller, a now-defunct shoe designer for performers and movie stars. 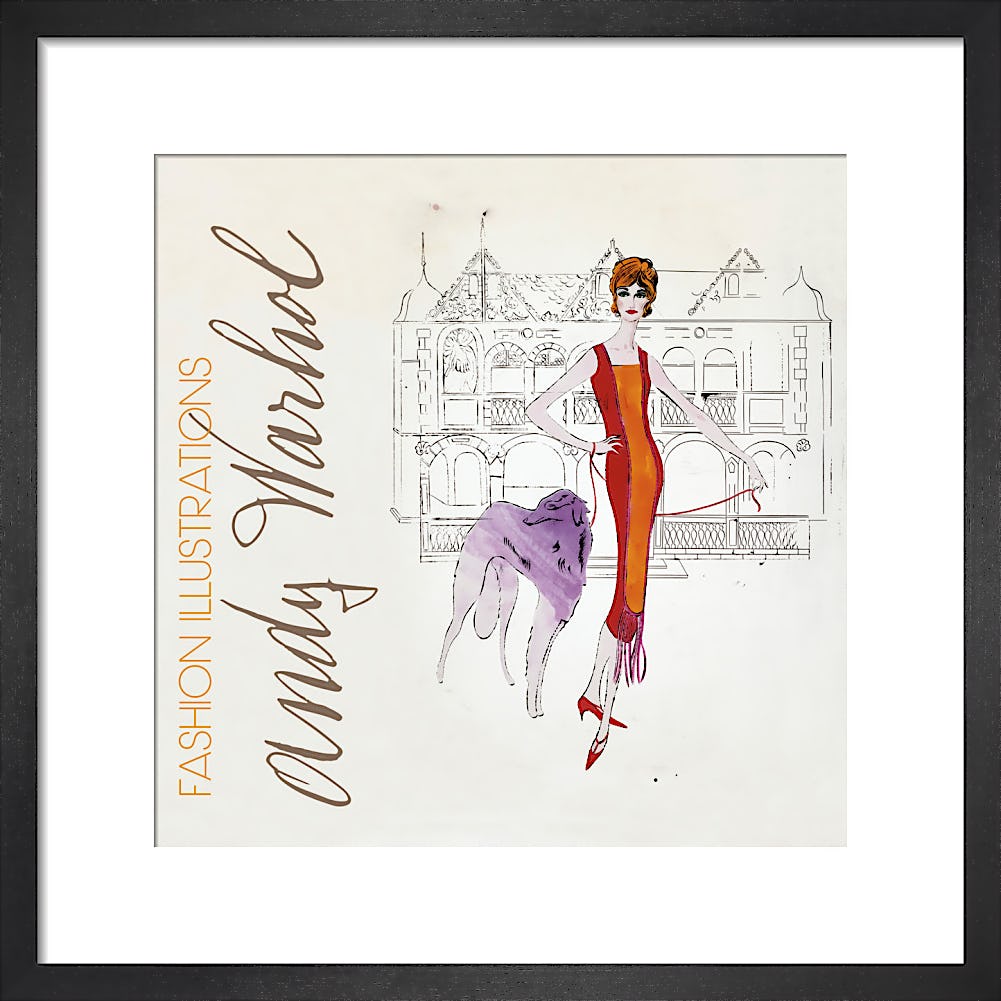 As a commercial illustrator, Warhol increasingly adopted the ‘blotted line’ technique. A rudimentary form of printmaking, it involved tracing images onto folded pieces of transparent paper, applying ink to the outlines, and then ‘blotting’ the ink while it was still wet to create a mirror image of delicate, dappled lines.

Besides being able to make multiple copies of a single master image, the technique also enabled Warhol to embrace the possibility of errors and imperfections. 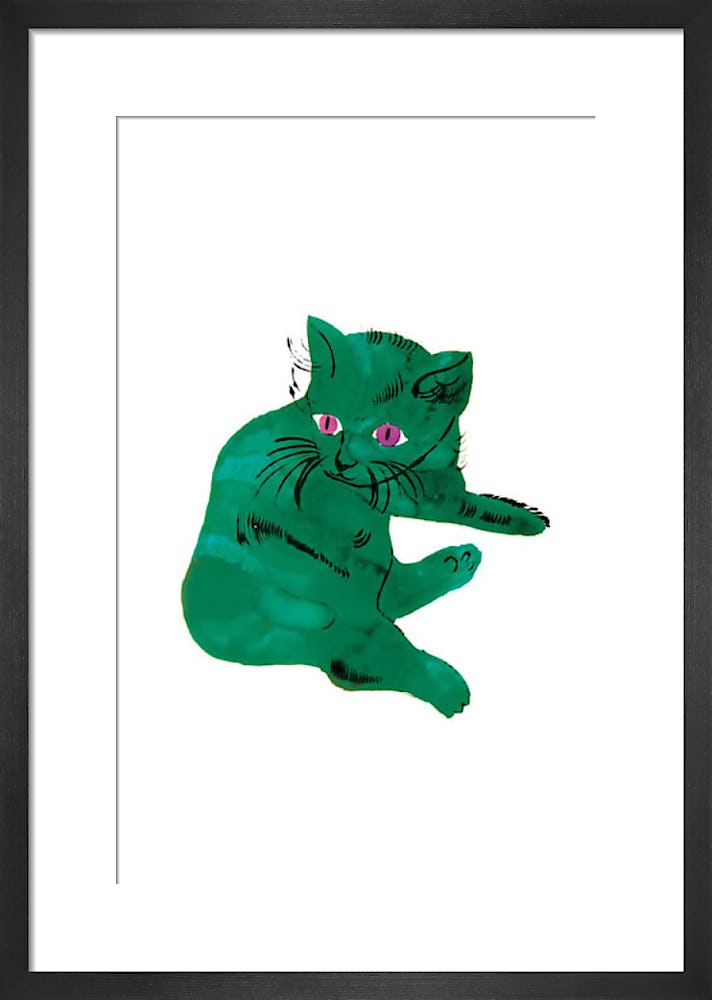 The significance of Campbell’s soup

Warhol’s relationship with the soup brand Campbell’s traces back to his childhood. When his mother, Julia Warhola, was struggling to make ends meet during the Great Depression, she crafted delicate flower arrangements out of discarded metal cans and went from door to door selling them to local residents.

When he grew up, Warhol stayed close with his mother who, doting on her son as he worked, reportedly served him all 32 flavours of Campbell’s soup – every day – for twenty years. 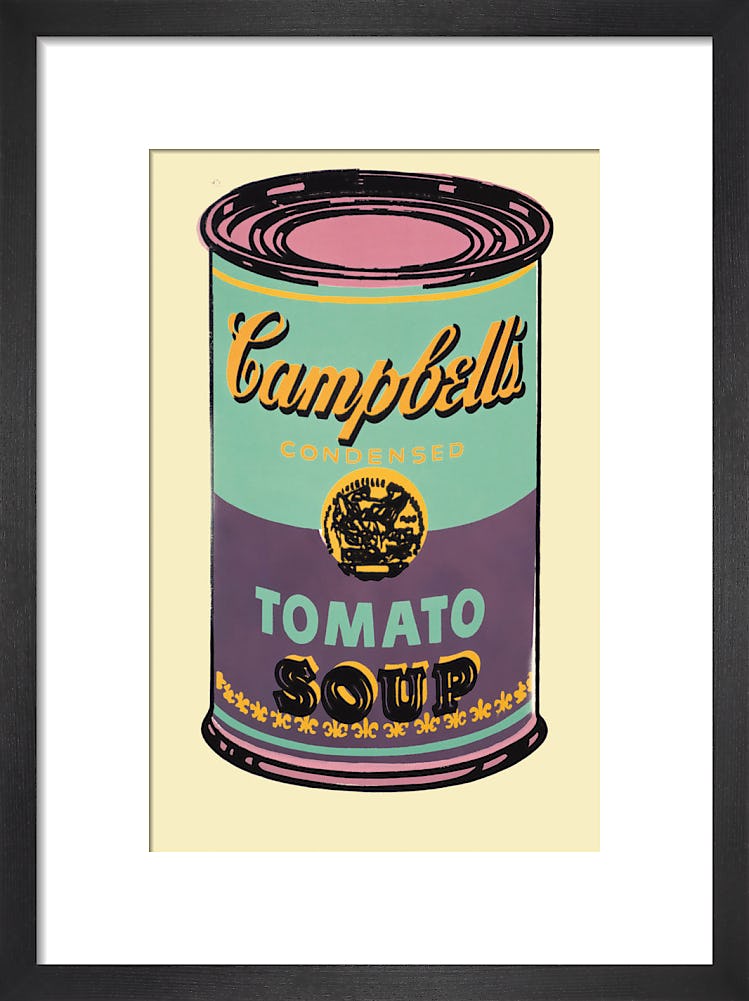 Warhol was obsessed with celebrities. When Marilyn Monroe died in 1962, he printed a publicity image from the 1953 film ‘Niagara’ which she starred in. By repeating her image, not only did he evoke mass production but he also made ironic commentary on mass media’s obsession with celebrity culture. 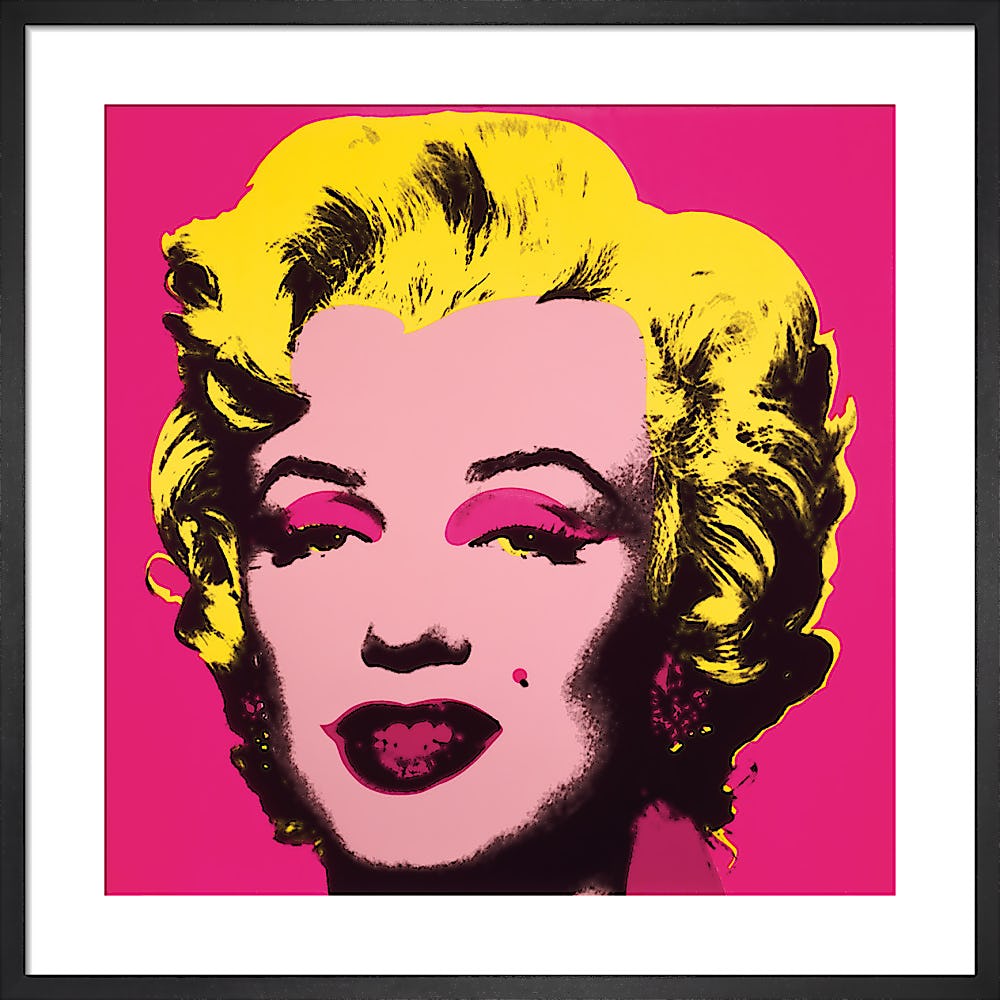 In 1968, a series of pithy aphorisms created by Warhol appeared on posters at the Moderna Museet in Stockholm. These typographic prints marked a pivotal point in the pop artist’s career. Designed by John Melin, they made the most of bold, black text to distil minimalist messages. 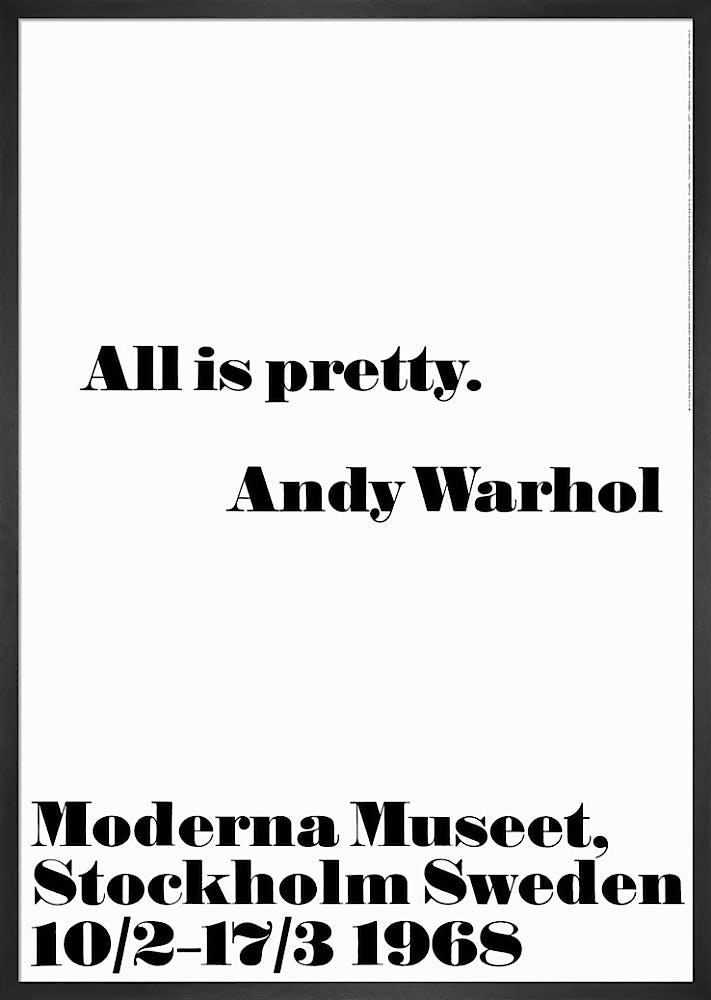 Warhol’s silkscreen skull series marked the beginning of a more macabre artistic trajectory. After purchasing a skull from an antiques shop in Paris, he took it to his studio in New York and, along with the help of his studio assistant Robbie Cutrone, adjusted the light source above to create varying lengths of shadows. His bold colour palette intended to jar with the morbidity of the scene. Reflecting upon that time, Cutrone is reported to have remarked that to paint a skull is ‘to paint the portrait of everybody in the world.’ 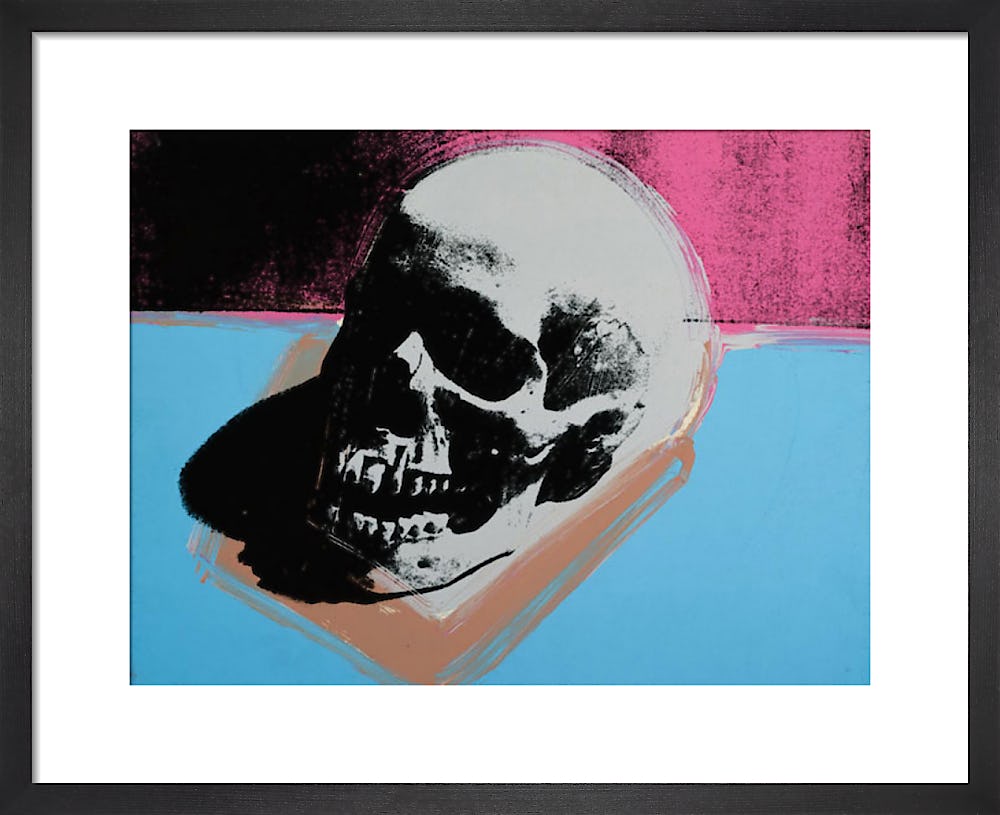 Andy Warhol often attended parties in drag, sometimes in dresses of his own design. In 1981 he and his photographic assistant, Christopher Makos, agreed to create a series of polaroid portraits.

Reflecting on the collaboration, Makos remembered ‘The whole shoot involved eight wigs, two days of posing, sixteen contact sheets, and 349 shots. We mixed stylistic elements together to express a new, ambiguous sexuality and gender confusion that had been developing in American culture since the Stonewall uprising in 1969. With the help of a professional theatre make-up artist, Andy became an extraordinary, altered image.’ 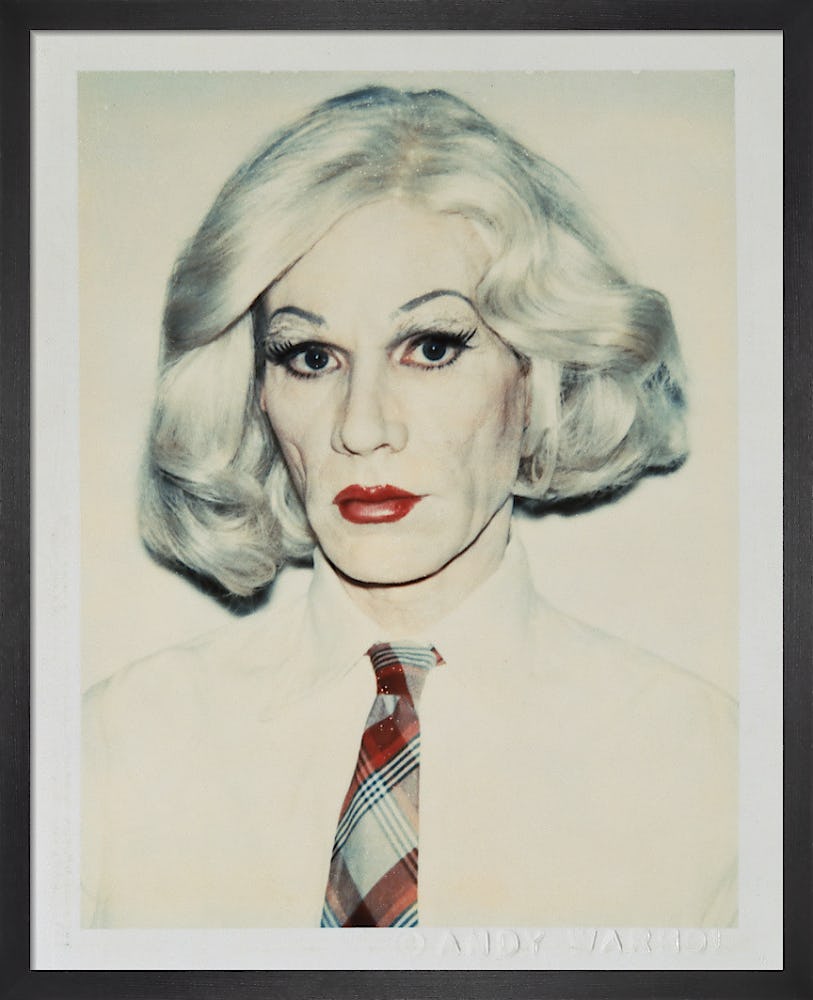 The year before he died, Warhol’s studio assistant Jay Shriver showed him some abstract paintings he had made by pushing paint through military mesh cloth. Obsessed with shared, mass-produced visual language, Warhol created a series of screen-printed canvases inspired by the military motif.

His decision to repeat a pattern originally designed to disguise armed forces in combat and transform it into a highly visible, psychedelic abstraction was – in typical Warholian style – deliberately ironic.

Captivated by camouflage, Warhol even included it in some of his self portraits, leading some to surmise that he was symbolically camouflaging himself whilst, paradoxically, leading a highly public life. 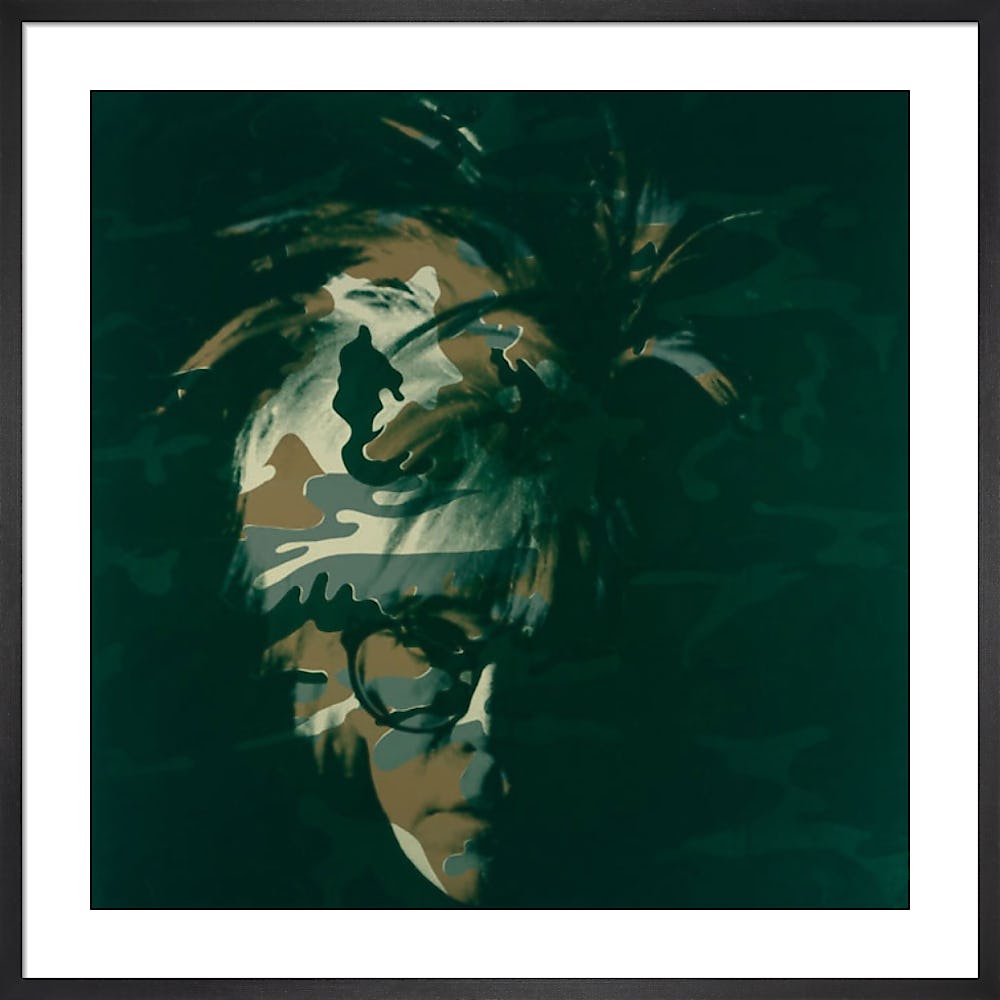 In 1984, the art dealer Alexander Iolas commissioned Warhol to create a series of paintings and prints based on Leonardo da Vinci’s Last Supper. Warhol took photos of the famous work (originally painted between 1495 and 1498) and transferred the image onto silkscreen canvases.

After which, working free-hand and on a dramatic scale, he produced over 100 iterations of The Last Supper. In 1987, his series was exhibited in the refectory of Milan’s Palazzo Delle Stelline. Just one month later, Warhol was admitted to hospital for gallbladder surgery where he sadly died, aged just 58.

Today he is undisputedly one of the most important and well-known artists of the twentieth century. His influence goes beyond art and has profoundly inspired both style and lifestyle in Western society. 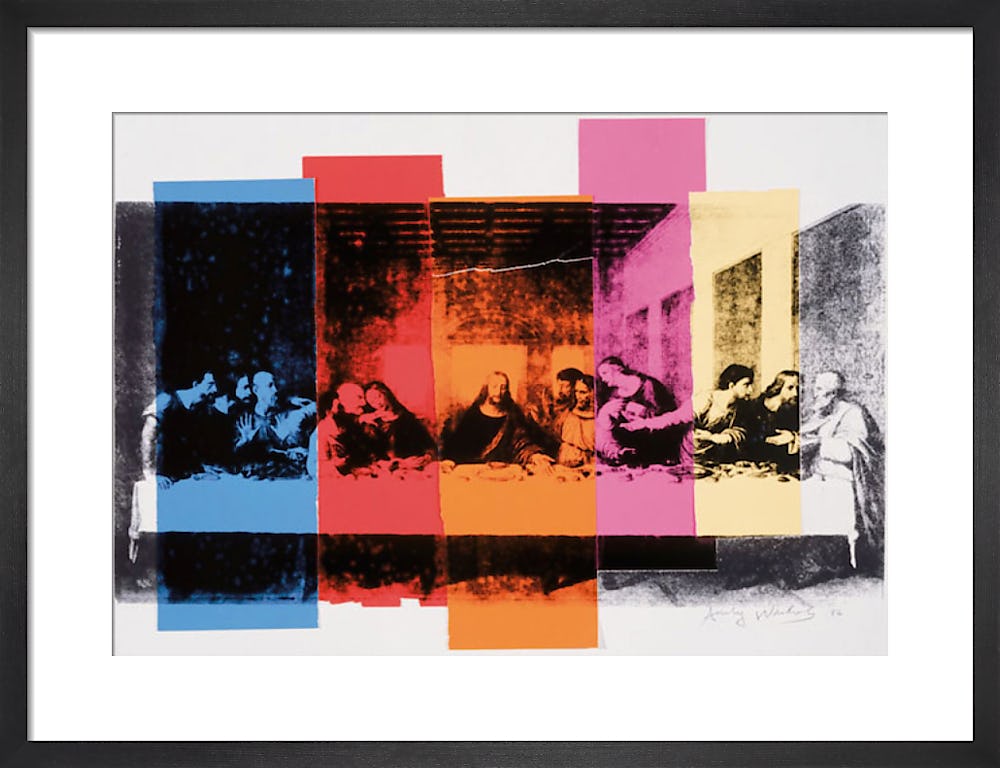