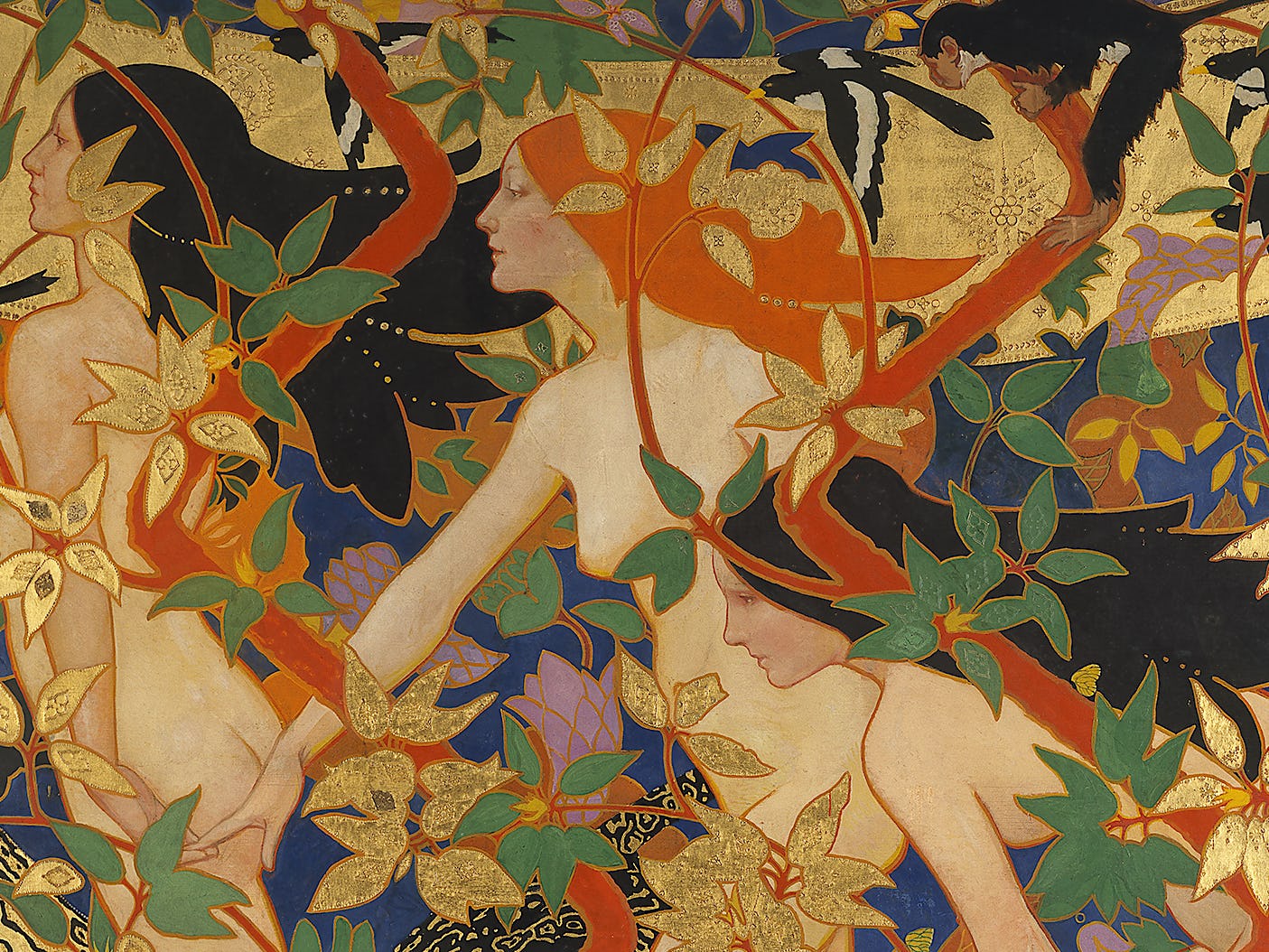 Originally created in 1926 by Scottish Art Nouveau artist Robert Burns (1869–1941), The Hunt was part of an ambitious first floor redesign for Crawford’s Tea Rooms in Edinburgh. With free artistic reign to curate every detail of the team rooms –  from the murals to the cake-stands, the furniture to the external façade and layout – Burns went to town. Join us as we take a closer look at his artistic career, and one of the few surviving Art Nouveau panels he designed for one of Edinburgh‘s bygone tea rooms.

After studying in London, Paris, and Morocco, Burns returned to Edinburgh in 1892. As an early proponent of Art Nouveau style, he and his contemporaries challenged the canonical understanding of ‘Fine art’ which claimed that applied arts – such as jewellery making, book illustration, furnishing and architectural ornament – should be relegated to a status below painting, sculpture and architecture. Knowing they were on the brink of something new, something more hopeful, Art Nouveau artists, like their Arts and Crafts predecessors, advocated for the unity of all the arts. ‘Craft’ was no longer a pejorative. It was something to aspire to and experiment with.

As ambitious as he was versatile, Burns experimented with many different types of media and styles. Initially, he tried his hand at stained glass, silver and elaborately worked wrought iron. Early signs of his talent were noticed and soon he began receiving ever-more impressive commissions. Working with Patrick Gedde’s Edinburgh Social Union, he created decorative oil paintings in a late Pre-Raphaelite style as well as murals depicting scenes from Celtic and Arthurian legend in the Old Town tenements across the city. By 1895, he was commissioned to illustrate The Book of Winter, and his illustration Natura Naturans is said to have influenced Gustav Klimt’s 1898 Fishblood (pictured below).

A rising star of the Art Nouveau movement, he exhibited at the Scottish Guild of Handicrafts and, by 1901, became its president. He went on to teach at the Edinburgh College of Art from 1908 to 1919 and was soon appointed the first head of Drawing and Painting. Such prestigious accolades soon attracted the attention of elite clientele – eager to create innovative new spaces for social events which, in the 1920s, often meant the production of ornately-designed tea rooms.

Burn’s biggest commission, for which he is most famously known, was the redesign of Crawford’s Tea Rooms at 70 Princes Street, Edinburgh. Often situated in prime locations to attract affluent shoppers and businessmen, tea rooms performed an important social role in society. More than just a convenient rest-break for residents to enjoy tea and shortbread in between shopping, tea rooms provided a place for gentility to see and be seen. The elaborate design of a tea room reflected a customer’s perceived ‘taste’. As soon as they stepped inside such grand venues, often with lavish window displays, live music from violin virtuosos, and countless function rooms, they became part of an elite social ritual. One characterised by smart, black and white uniform wearing waitresses serving tea, scones, and other light refreshments on crisp white tablecloths.

A portrait of two waitresses in the Room DeLuxe at the Willow Tea Rooms on Sauchiehall Street owned by Kate Cranston, c. 1903. Wikimedia Commons.

The market for such places had been booming since the 1890s. Miss Cranston (1849–1934) commissioned renowned Scottish architect, designer, and water colourist Charles Rennie Mackintosh and George Walton to design Willow Tearooms in Glasgow. Novel interior decoration, especially when it created an otherworldly atmosphere, drew customers. David Crawford’s aim when employing Burns was to ‘create an environment which would attract the best class of customer.’

Burn’s decoration of Crawford’s tea rooms in Edinburgh, which contained several different restaurants, grill rooms and cafes, took four years to complete. Owing to his patron’s desire for ‘unity and coherence’, Burns also designed menu cards, cake-stands, music programmes for the resident orchestra as well as labels and wrappers for items sold at the bakery. With the help of some of his students (most notably his protégé Phyllis Bone who went on to become the first female Royal Scottish Academician), he designed every inch of Crawford’s tea rooms. Younger artists were responsible for working up his sketches into finished works of art or into measured drawings to give to manufacturers. Whilst Burns himself executed opulent panel paintings for banqueting rooms.

In the Chinese room on the first floor, Burns based the interior design scheme around a series of panels inspired by Japanese screens of the Edo period. Using a colour palette dominated by red and black as well as gold leaf over modelled plaster, he produced an imaginative reinvention of the Spanish Armada off the coast of Scotland (photos of which can be seen here). The remaining walls were hung with oriental textiles that set off two elaborate lacquered and veneered cabinets (also designed by Burns) made by the Edinburgh firm Whytock and Reid. Travel writer Edwin Muirs visited in 1935 and described the space as ‘more strange than a dream’.

The allure of antiquity

Often characterised by its sinuous flowing lines, Art Nouveau is widely considered a metaphor for artistic freedom – drawing on nature, dreams, and classical mythology for inspiration. Just as Renaissance, Baroque, Rococo, Romanticist, and neoclassical artists had been seduced by the allure of ancient antiquity, Art nouveau artists like Burns also revered – and reinterpreted – classical subjects. The Hunt (previously known as Diana and Her Nymphs) was located at the top of the staircase leading to the Ladies’ Dining Room. The space, which also featured a Madonna and Child over the mantelpiece and watercolours depicting four Greek goddesses – Athena, Aphrodite, Hera and Artemis, representing strength, love, wisdom and purity respectively – was believed to have been designed with a theme of the worship of women.

Ancient mythology was attractive to Burns because it was associated with inspiring heroic deeds. As the impossibly beautiful, immortal goddess of the hunt, wild animals, fertility, and the moon, Diana made an interesting subject; an ideal mythological mascot for the artistic ideals of Art Nouveau.

Yet, unlike his Renaissance predecessors – whose depictions of Diana often overwhelm with a sense of solemnity (see Johannes Vermeer’s Diana and her Companions, 1655), Burn’s Diana is graceful, yet focussed and fuelled for a fight. Accompanied by gilded gold leopards, jaguars, and white-bearded monkeys, Diana and her nymphs glide through tropical red and gold creepers, their long flowing tresses billowing behind them as magpies swoop high above their heads. An idealised scene, it is typical of many opulent Art Nouveau artworks. Fearless narratives reinterpreted for the modern day tea room visitor attempted to recall an idyllic, distant Arcadia – something so brutally lost after the bloodshed of World War I. Burn’s work was optimistic, little lighthearted even with the inclusion of a tiny green car in the left hand corner, supposedly a playful nod to his own love for the exciting new world of motor travel.

With his success in commercial art, Burns bought 49 Northumberland Street in Edinburgh, and converted the attic into a large studio space. However, sadly, Crawford’s tea rooms was to be his last interior design commission. Though he continued to design advertisements for the Crawfords, in 1929, he suffered from a stroke which confined him to bed for six months. Today, Crawford’s tea rooms look very different. In the 1960s, they were refurbished in a Scandinavian style and broken up into separate shops. The Hunt is one of just a handful of panels to have survived. The original now resides in the safe hands of The National Galleries Scotland.

The Hunt by Robert Burns, 1926 is produced in partnership with National Galleries Of Scotland. It is printed on matt 250gsm conservation digital paper which is made in Germany from acid and chlorine free wood pulp. The paper is manufactured on a Fourdrinier Machine using a process first perfected and patented by the Fourdrinier brothers in 1803.