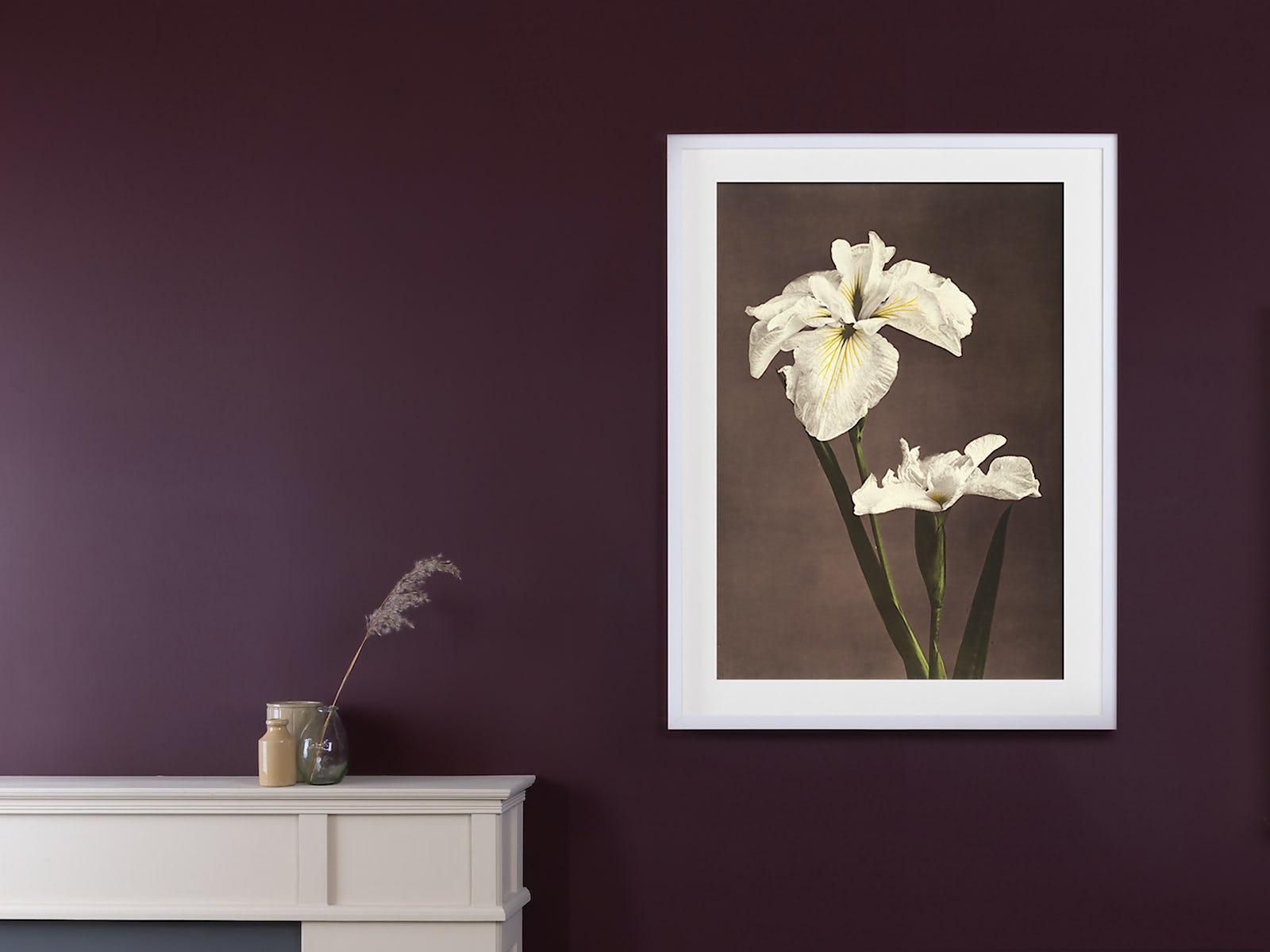 'Iris Kæmpferi, from Some Japanese Flowers' by Ogawa Kazumasa.

King & McGaw's long-standing collaboration with the V&A features a selection of art prints that draw together highlights from the museum's world-renowned collections, including the Asia department which houses some of our customers most-loved pieces.

We are thrilled to talk to Masami Yamada, Curator, Asia Department, about her experience of life at the V&A and the significance of some of the best-sellers from our print collection.

What led you to this role, and has Asian art always been an interest of yours?

I grew up in Tokyo, and it was while studying western painting during my undergraduate years that an exchange year in London sparked my interest in the ways in which Japanese art and design are understood in the global context. I was the only Asian student in my UK art history seminar groups and was often asked for my interpretations of western masterpieces in the London collections from a Japanese perspective. This naturally made me strive for better understanding of my own culture.

Before joining the V&A, I spent seven years in the Japanese Art Department of a London-based auctioneer. It was the perfect place to learn about the historic art trade between Europe and Japan. I could study the types of objects that had been exported to Europe from the late 19th century to the early 20th century, and which still dominate today’s western market. When the V&A announced a new position of Japanese art curator in the Asian Department, I was already looking for a new challenge to bring more contemporary Japanese art and design to a wider western audience. The role was ideal.

Is there such a thing as a typical day as a curator at the V&A?

When you are a curator every day is different. Mornings could start with object moves or rotations in the public galleries before the Museum opens its doors at 10am. Our work patterns obviously changed with the pandemic. Currently, we have access to the collections only for essential work, and continue working from home for the most of time. One might wonder what a curator can do from home, but there is actually plenty to work on, from making display plans and giving online lectures, to answering public enquiries.

Any memorable moments or exhibitions?

When I joined the V&A it was already working towards Europe’s first major exhibition on kimono fashion –Kimono: Kyoto to Catwalk. I worked closely with the exhibition curators during these planning stages and encountered countless breath-taking kimono. The exhibition opened at the beginning of this turbulent year to great public acclaim and enabled visitors to experience the sartorial splendour that Japan has shown from the 17th century to present day.

Among many highlights, it was wonderful to see the recreation of a high-ranking woman’s selection of sumptuous textiles, as shown in Utagawa Kunisada’s woodblock print, coming to life. Although it was primarily a fashion exhibition, many other works, including woodblock prints and furniture pieces, were on display to contextualise kimono fashion in different times and locations. Thanks to the incredible diversity of objects in our collections, we could select a sumptuous lacquer cosmetic set, mirror stand and porcelain candlestick as shown in the print.

'Scenes of daily life' by Utagawa Kunisada I

Could you tell us about the significance of these pieces and their history? 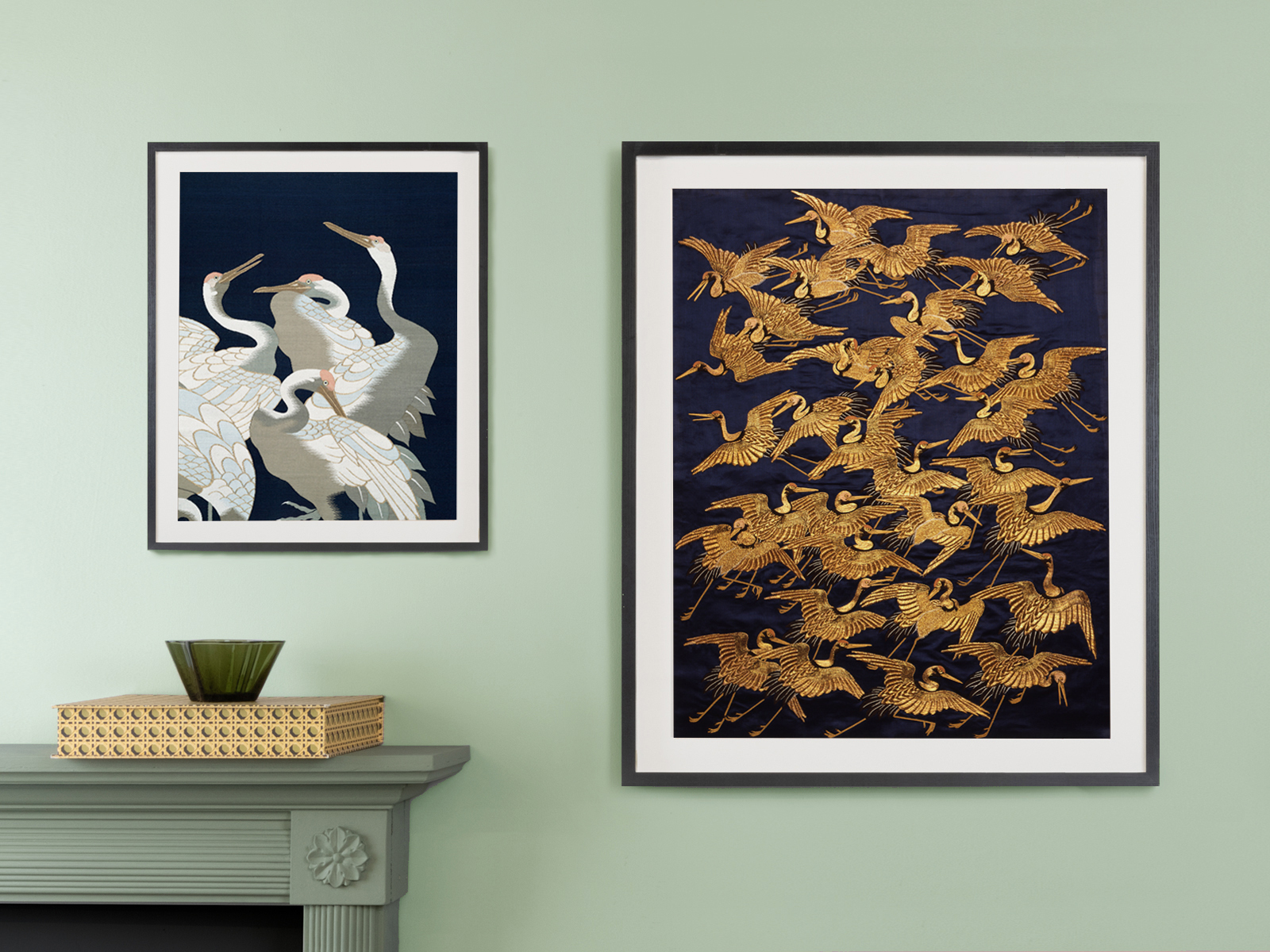 'Cranes' and Fukusa', both from our V&A Japanese collection.

Two of the best-selling pieces are prints of the traditional wrapping cloths, fukusa, used to present gifts. The ritual of gift-giving has a long history in Japan. During the Edo period (1615-1868), gifts presented at celebrations, such as the New Year’s Greetings or weddings, were placed in a box on a tray on which a fukusa was draped. Once the gift was presented, the fukusa along with its box and tray were returned to the giver. Fukusa became profusely decorated from the 18th century. In the 19th century the custom spread from the elite military class to the wealthy merchants of urban centres. The choice of an appropriate design was an important part of the gift-giving ritual. The selected works are both from the second half of the 19th century. The silk satin fukusa with a flock of flying cranes is a particularly lavish example embroidered with silk and gold-wrapped threads. Cranes are one of the most common auspicious motifs seen in Japanese art. They are a symbol of longevity, for they are believed to live for 1,000 years.

Among many works by traditional ukiyo-e print artists, South Wind, Clear Dawn, famously referred to as ‘Red Fuji’, by Katsushika Hokusai (1760-1849) is the customer favourite. While Japanese woodblock prints were first produced in black and white, with occasional hand-colouring, full-colour printing, known as nishiki-e (‘brocade pictures’) became available from the 1760s. Mass production, enabling low prices, was the result of the development of woodblock printing in urban centres, particularly in the Eastern Capital city of Edo (present-day Tokyo). South Wind, Clear Dawn from Hokusai’s first landscape series Thirty-six Views of Mount Fuji is one of the most iconic and instantly recognisable works of Japanese art, depicting the eastern side of the mountain in late summer. This type of single-sheet print could have been purchased in a shop for the equivalent cost of two bowls of noodles. It was a perfect souvenir for anyone who visited the Eastern Capital. The series, first published around 1831, depicts Mount Fuji seen from different locations in various seasons. Its broader significance lies in that its success established landscape subjects as a new ukiyo-e genre. Today the ground-breaking series is linked to modern-day travellers once again. From 2020, its most iconic pictures, including Red Fuji, are featured on the pages of newly-designed Japanese passports.

What art do you have on your walls at home?

Living in a rented flat, I don’t have much freedom to decorate my walls at the moment, but being a cat lover I have various cat imagery from a contemporary print by a British artist to a Japanese vintage poster. I also treasure a lacquer panel by contemporary Japanese artist Ando Saeko.

A big thank you to Masami Yamada for her time in answering our questions. 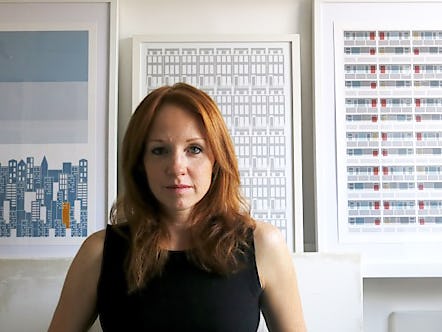 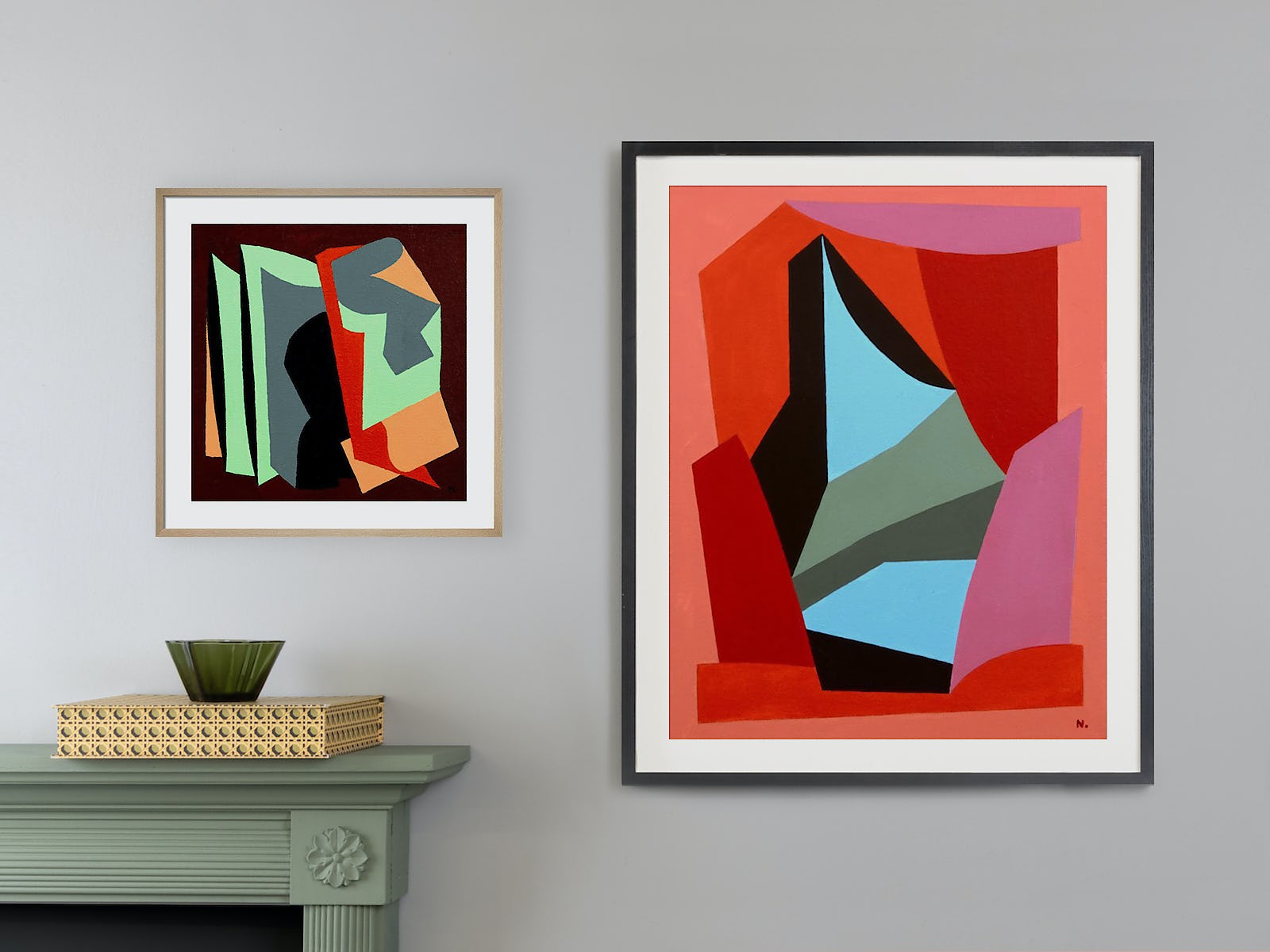 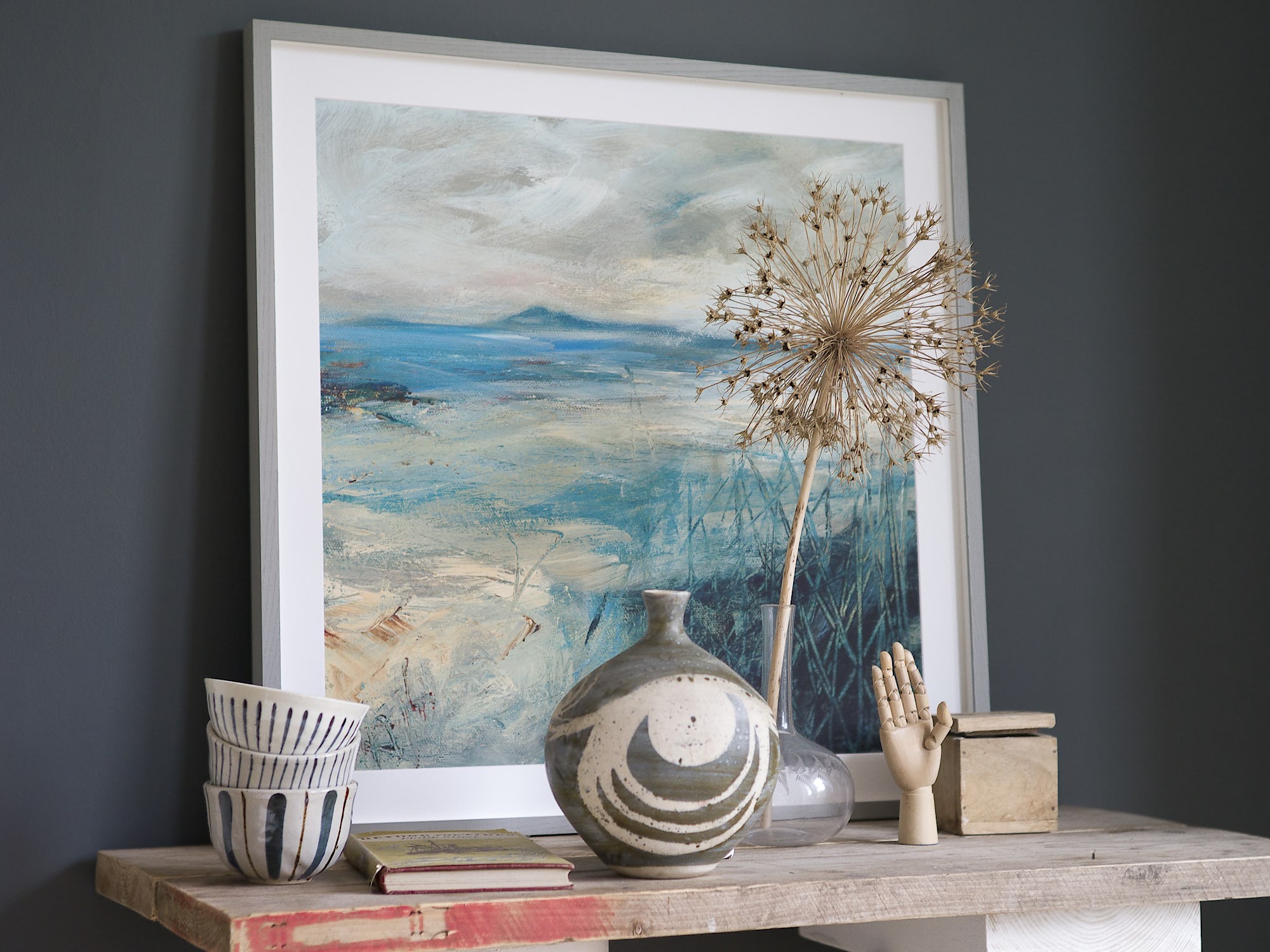